After all these years of chocolate reviewing and making up categories of chocolate (candy, confections, novelty, artisan, etc.), I've decided to add a new one: fine foods chocolate. 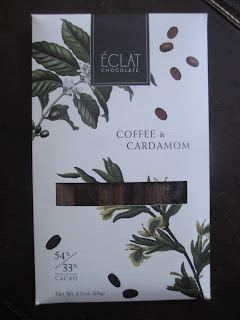 This Coffee & Cardamom bar from Eclat Chocolate is one of the chocolates that kind of breaks my rules about going for the more ethically-sourced cocoa products. It isn't even organic. It's so far apart from the usual chocolate style going around that it has no info about cocoa origin or the flavor notes of the chocolate or any of that, just a mention of the cocoa percentages. This one is a combination (not a mix) of 54% dark chocolate and 33% milk chocolate. The packaging gives that sleek, fine foods style rather than particularly the fine chocolate style. While it's very pretty packaging, it just looks different. Even the little window that lets you look in at the chocolate (which is honestly pretty convenient) is more reminiscent of crackers and cookies and things like that than chocolate. 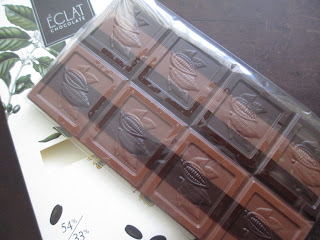 Look at that bar design, too. I appreciate its singularity. The alternating stripes of milk and dark chocolate and the cocoa pods and leaves are quite striking. Sometimes when a chocolate is more of a food than a chocolate, the bar's design ends up being fairly plain or commonplace. 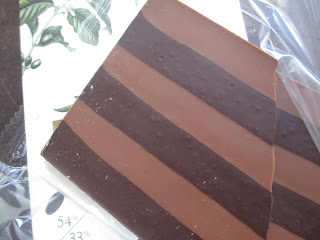 The aroma is fragrant. The effect here is that the fragrance comes from the chocolate's own flavor notes rather than necessarily added flavor. Though of course you know that it's all coming from the added cardamom and coffee.

I tried to break off a piece that included both types of chocolate. I got some of that warm cardamom taste and then started crunching on coffee. Coffee comes across the strongest by the time the chocolate is mostly gone. For the second piece, I tried to get a bigger one and in this way was able to taste more of the milk chocolate, this time paired closely with the taste of the cardamom. I would call this a standard fine foods milk chocolate, nothing particularly noteworthy on its own but not bad. I'm not seeming to be able to pick up the dark chocolate specifically. It's too low of a cocoa percentage to distinguish from the milk chocolate right next to it. So the milk chocolate naturally ends up registering more. 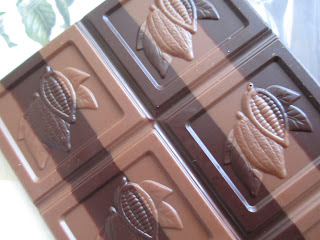 I keep on chewing this chocolate more than letting it melt, both because I'm trying to get all the flavors mixed in and because it has those coffee bean pieces. So definitely a munching chocolate.

It's good. There is a good balance on the cardamom, which is present but not overwhelmingly strong. The cardamom also makes the coffee, which is quite the common flavor combination with chocolate, more interesting. Chocolate like this is meant to be shared with strong flavors like these; otherwise, it would have no interest. So it's definitely a fine foods chocolate (since the focus is on the added flavors and not on the chocolate), but it's a good fine foods chocolate.
Posted by Deanna Skaggs at 9:15 PM