This Chocolate Creamed Honey collaboration between Zak's Chocolate and AZ Queen Bee Honey is not the first chocolate honey I have come across. My seven year old review of CC Pollen Co.'s Chocolate Honey certainly takes me down memory lane. It's weird to think of a time when I didn't buy local honey, and I don't shop at Whole Foods anymore (because of, you know, Amazon). Time takes us on many paths, and the habits we have today aren't necessarily the same as those of yesterday. 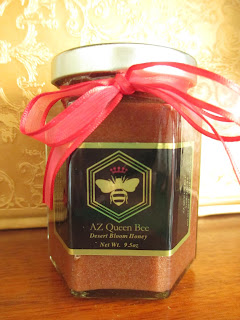 Now you might expect for there to be little room for variation between two chocolate honeys; however, such is not the case. They're quite different.

Honey varies not just based on how much it's been processed but also on things like how old it is and what temperature it's currently at. CC Pollen's was pretty stiff, but Queen Bee's is more the texture of caramel. I used to favor buying creamed honey for this very texture; it's sweet and smooth while also still being easier to spread with a spoon or knife than liquid honey (which you kind of have to drizzle). This one is probably especially soft because I keep my home warm (my bearded dragon does not complain). 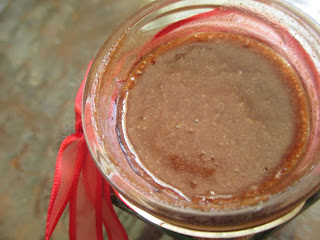 But I'm getting a little ahead of myself. Let's start off with the jar. The jelly jar shape lets you know this is a jelly-like product (Queen Bee also makes their creamed honey in plain, blueberry, strawberry, and lemon). The black and gold label is classy and sleek enough to make this an elegant gift. Birthday present, hostess gift, friendship offering. Or also a treat for yourself.

Opening the jar reveals a rich and strong aroma. It smells of honey but also more strongly of chocolate than I'd expected. I'd say that carries true to taste, as well. It could just be memory, but I don't recall ever having a chocolate honey that tasted this much like chocolate. To clarify: the only ingredients here are honey and cocoa powder. A good helping of cocoa powder, too, it would seem. You can see the specks of it, too, if you look at a thin layer of the honey against the right background. So there is genuine chocolate flavor here rather than artificial chocolate flavoring. 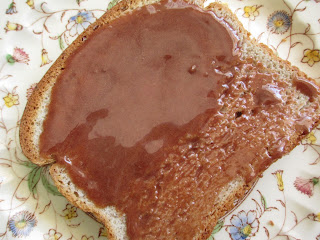 I spread it out on some toast first, one half more thickly and one more thinly for the picture (not that any of these pictures look much enticing; I have not discovered the secret to photographing spreads). Honestly, you can go either way. If you're limiting your sweets, a little of this does go a long way. But spreading thickly is fun, too. Because the chocolate is fairly strong and the honey is incredibly rich and sweet, this makes for a fair substitute for chocolate spreads. It's incredible by the spoonful, too.

I did a little experiment, too. When I make hot chocolate, I just use a little cocoa powder and some honey (usually some cinnamon, too). So what would happen if you added a big spoonful of this chocolate honey to some heated milk/non-milk? I had to find out for you. The effect is like a light milk chocolate hot chocolate. There is just enough cocoa to give a mild chocolate flavor, and of course the honey acts as sweetener. It was an enjoyable beverage and so I'd recommend at least trying it once if you're curious, but I only did it once because it seemed a shame to dilute this spread rather than enjoy the full force of its flavor. 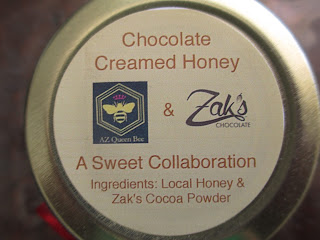 A culinary treat is what this is. You don't have to get creative. Simple bread is just fine. But I'm sure the foodies would enjoy putting together tasting boards with it. And you have the benefit of knowing exactly what is in it and also knowing that it comes from two great small businesses.
Posted by Deanna Skaggs at 8:53 AM