Something a little different today. From time to time, I'll review chocolate soap or chocolate candles or other atypical chocolate products. Cereal occasionally has come in. But this is probably the first snack bar. There are, I suppose, enough chocolate snack or energy bars that I haven't the inclination to go about reviewing them. But I was curious about this one because I do generally like Bob's Red Mill products (though I'm used to them selling ingredients like flour or oats or cornmeal rather than things that are already put together), so I wanted to see how they would go about this. And the design reminds me more of a candy bar than of a snack or energy bar. 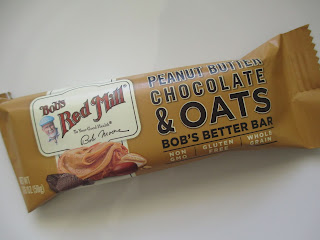 Or maybe it just appealed to me because it comes in this light, neutral, pale brown, slightly yellow color. (Shiny packaging scares me, this is true.)

Once I opened it up, though, it felt rather too much more like a Clif Bar than I suppose what I'd been imagining. The look is similar with that smushed ingredients style and the smell of the peanuts was similar. So it wasn't particularly exciting. The taste, too, is much like a Clif Bar. There is more of a flavor of oats here, though, oats with that soft, semi-flavorless flavor. The chocolate has presence but the peanut butter doesn't come in much at all. 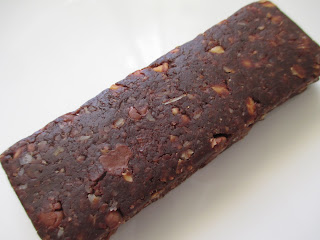 So yes, this is a snack bar rather than than a candy bar. Not an energy bar, either, more just a granola bar type thing. It does taste nicer than a Clif bar, probably not least because it is much softer in texture (other than the sugar in the chocolate, the only sweetener is honey, which probably helps with the texture, as well). 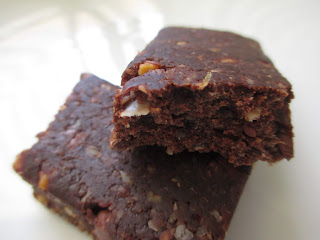 After tasting a bit of it, I put the rest in my bag to waltz around Boyce Thompson Arboretum State Park this week (don't worry; I practically had the place to myself and would go almost an hour at a time without seeing another living soul besides the lizards, birds, and rabbits). And I did find this chocolate oat bar quite delicious when it was nice and warm. It took on more of a fudge feeling, becoming almost a tad too melty. The oats helped to give it that freshly baked feeling while also allowing the chocolate flavor to take over.

Not a bad choice, then, if you're looking for something to throw in a bag. Normally I'd recommend just eating some almonds when you need an on-the-go snack, but hey, maybe now is a time when people are wanting to rely less on finger food snacks? So while this product is a little different from the type of thing I normally review and while I probably won't usually be buying many of these, they are a nice option for the times when you do need a hands-off, pre-packaged, nice-tasting, okay ingredients snack.
Posted by Deanna Skaggs at 8:53 AM