A Non-History History of the Corset

On first picking up The Corset and the Crinoline: An Illustrated History by W. B. Lord, one might assume to be picking up a well-researched, perhaps rather dry non-fiction text that describes all of the contexts in which the corset has been used as well as the various cultures, fabrics, patterns, fashions, and attitudes towards said garment. The title, though, is slightly misleading. 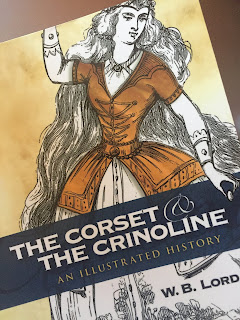 The book begins that way. It begins talking about different historical cultures who used some type of corset (although the title also mentioned crinolines, the main content matter is corsets) and how the style of that garment developed (or rather stayed much the same) over the centuries. All quite interesting, if more brief than I'd expected. Once you pass the book's halfway point, though, you arrive at the middle of the nineteenth century and the text becomes a commentary on the philosophies behind the corset instead of simply a history of the corset.

Because there you have it: this book was originally published in 1868, when the corset was in use in full force. So it becomes quite a biased look and in fact contains a rather draining "conversation" about whether or not corsets are beneficial. There are pages of letters written to a lady's magazine from various people all responding to one another's comments. While I do love reading firsthand accounts and that sort of thing, these were like looking at social media comments. Tedious, biased, and of questionable truth. That is in itself interesting to study but like I said, tedious, especially coming from a modern perspective on corsets.

And no, my perspective isn't that they were simply a horrendous contraption. You have to look at them as a whole. They were horrendous; I can't stand any modern fashion accessory that remotely resembles a corset in terms of tightness. But most women were not wealthy and from what I understand, women who had to work either at jobs or maintaining their households did not wear corsets tightly. And a corset that is simply form-fitting (made specifically for the individual) rather than tightened up isn't entirely unlike the heavy-lifting girdles you still see people using today when doing manual labor. It can in fact be good back support if made and used in a certain way. Part of this includes not tightening over the chest--which even this book makes sure to mention is a bad practice.

So tangent aside, this book is more of a historical text centered around corsets than a history of corsets. You'll learn a little about fashion and materials but not too much. And in fact, you'll learn even less if you're not already familiar with some basic terms. Given that this book was written in 1868, it assumes an 1868 knowledge of clothing. Even crinoline is a word that not all modern readers will be aware of (you would probably know it as a hoop skirt, though it was not always in the shape of a hoop and so was not always called a hoop skirt). I suppose all this means that it's quite a niche title. Still a good read, though, if you are interested in this niche--and there are indeed plenty of illustrations, which is wonderful.
Posted by Deanna Skaggs at 4:32 PM