Normally I don't post anything about the Images of America books. Usually they're not well-suited towards the typical reaction-to-a-book post, though I do quite like them. You can find one on whatever city or town you're interested in--and probably on your favorite state park or historic bridge, too. In fact, the sub-topics are so many now that I wonder how many total Images of America books there are about the greater Phoenix area. 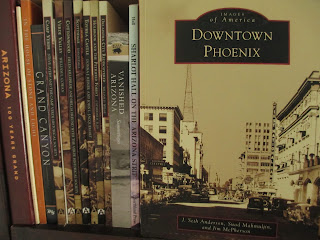 I did have something to say about the Downtown Phoenix book: it was rather depressing. Phoenix history is fascinating because it's in many ways the history of the effects of industrialization. People had been settling in Arizona for decades, but Phoenix didn't really take off as this massive, constantly growing thing until it had a good water supply and a connection to the railroad. So the start of the boom for Phoenix was the turn of the century, when electricity and motor cars and refrigeration were on the rise.

It was quite a "cultural" place. You turn the pages of this book and find all sorts of beautiful or fascinating buildings. But then you get to the end of the caption and read "no longer standing" or "demolished in ___" and it's really quite sad. Like a lot of cities, Phoenix became quite awkward as people started settling more in the suburbs and focusing their attention into those places.

Think about even today. You'll go downtown if you're going to see a game or a show or if you work in one of the office buildings. But for a cute old town district, you go into the surrounding cities. For restaurants, probably the same, unless you're catching something right before the show or game starts--even if you are going to Phoenix, it's probably higher up than the downtown area.

Granted, the entertainment area is there in Phoenix (I miss you, Symphony Hall). Even some of the historical has been saved (looking at you, Heritage Square). And there is art, too, with First Fridays and the art galleries. But when you look at the pictures of great brick buildings that were smothered and then torn down, it's regretful that things didn't happen differently.

The hope is that when we build things, we build things for permanence. And when we look at a place, we also look at it with permanence. Instead of saying, what can we demolish, to say what is already here that we can continue to use? I don't like the idea of a place where buildings are torn down and rebuilt every few decades. How wasteful is that? Instead I hope that we can more often build things to stay and maintain the things that we have.
Posted by Deanna Skaggs at 11:13 AM