When Did You Read?

Back when the Internet was young and online shopping even younger, I was enchanted by the idea of C.S. Lewis's Poems because of talk that the volume contained some Narnia poetry. Then being obsessed with Narnia, Poems then seemed like the unattainable portal to more Narnia content. Now that some fifteen or more years later I find Poems in my hands, I'm rather glad that I didn't get a copy of it back then. 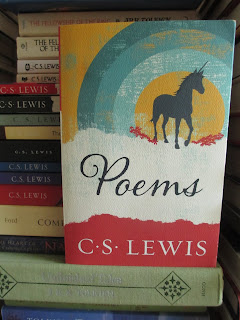 There isn't much Narnia content in here. Despite the unicorn on the cover, that angle is covered quite thinly. So if that is your sole reason for coming to this book, well, you'll probably be disappointed in that regard. And I would say you're best off if you're already familiar with several of Lewis's writings, maybe a touch of Narnia but more so with his non-fiction or even at times with The Space Trilogy.

The book was put together posthumously and first published in 1964. It loosely goes by topic rather than year since many of these poems are written at unidentified times. And yet from the content and style, you can begin to guess at what point in his life he wrote them.

You see the young man enraptured by his college studies and writing poems about it all. The imaginative mind dreaming up unicorns and gnomes. Quite frankly, though, reading all this as who I am today, these were the pages I found least interesting. They felt more shallow and uninteresting to my mind at this moment. Better I found the reflections on nature versus industry and the pain of life and love.

Poetry is a very honest art form--perhaps even more so if, like many of these, it is not written specifically with publication in mind. So the titles that show with stark honesty all the pain that we cannot shut away or escape in living are the most thought-provoking. You can see the thoughts that were part of certain concepts Lewis explores in both his fiction and non-fiction writings. While a few of these poems are quite nice on their own, overall I'd say this book's best value is as a kind of companion piece to his other works.
Posted by Deanna Skaggs at 8:12 AM