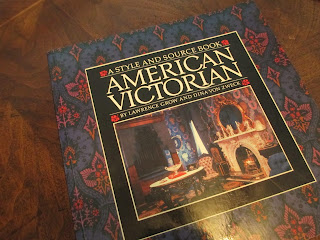 This book was published in 1984 as a kind of guidebook during the Victorian revival of the 1980's; it gives quick outlines on certain traits of Victorian style through the years (the Victorian era covers a wide range of years with significant changes throughout), suggesting how readers might incorporate these elements into their homes in the present day. The message is repeated that only museums need to strive for 100% historical accuracy; homes have the freedom to take the spirit of the style and make it livable. (Using a present day sofa is one of the quickest examples of this.) And that works better with Victorian style than any other historical style because Victorian style was itself eclectic as far as the sources of inspiration and as far as its use of historical elements.

Renaissance, Gothic, Colonial elements all start to reappear during the Victorian era. They might not stand out so much to the casual observer because they're all "old" so they just blend in. But the fact that Victorian style used historical influences (and world influences) means that it's easier to blend in present day influences, as well.

I have a gorgeous Eastlake etagere in my living room on whose shelves is a clay dinosaur bank from the mid-20th century or thereabouts and I also have a Mary Coulter Southwest side table for my TV and Disneyland silhouettes on another side table and R. Atkinson Fox prints on the walls and a whatnot shelf with cast iron pigeons on it. None of it really "goes together" in the sense of creating a historically Victorian space. It isn't Victorian at all in that sense; I'm not even trying in that sense. But that's the point: I'm the present day Victorian putting together my space.

The TV and book titles are pretty much the only things in the living room that give away the year of this space. It doesn't look Victorian because there are obvious 20th century elements (even apart from the 21st century things like the TV). But it also doesn't look too much like any one time period in particular--except that it is most highly influenced by the Victorian. As such, even if I were to stay in this space for 50 more years, it would never need "redecorating." It would never need to be updated because it was its own style to begin with. Only those little elements, those little tokens from the present day, would change along the way so seamlessly while the core concept, the central idea of style, remained the same.
Posted by Deanna Skaggs at 8:47 AM