Enter a tourist shop in Arizona and you will find gummy prickly pear fruit candy and scorpion lollipops. But what if instead of these, you took home a bar of locally made chocolate adorned with barrel cactus seeds? It's novelty as well as gourmet. And it just plain makes sense, as I will outline. 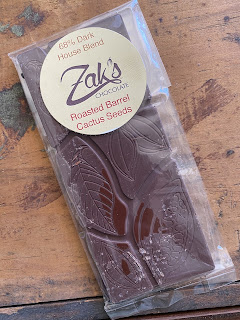 Zak's Chocolate here in Scottsdale uses their 68% house blend for this bar. It's part of their Snacking Bars line, which takes kind of a bark concept, with ingredients on other bars being things like ginger or raspberries. So the 68% chocolate is a lightly sweet dark chocolate that keeps the tone mild and not too deep while still delivering rich chocolate flavor. This way you can enjoy the seeds or the ginger or the raspberries without feeling like you're giving all the focus to the flavor notes of the chocolate. 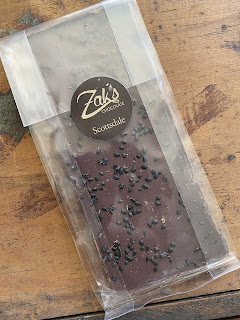 I first came across roasted barrel cactus seeds just last year at Native Seeds down in Tucson (though a small shop, they have a wonderful selection of products; I highly recommend paying them a visit if you're in town). They're tiny dark seeds, about the same size as sesame seeds or maybe even a little smaller. I tried out putting them on my appetizer board for Thanksgiving; they're fun to gather on the edge of a piece of cheese. 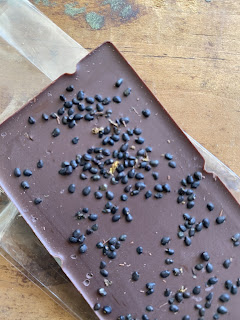 With chocolate I wouldn't have pictured them but why not? We add nuts to chocolate frequently and sometimes seeds, too, though less commonly. And I've been highlighting all of the collaborations that Zak's Chocolate does with other small businesses lately--so this is taking things a step further and using what is also a locally-sourced ingredient. The coffee and the cocoa beans have to be brought in, but the barrel cactuses are in the state already. 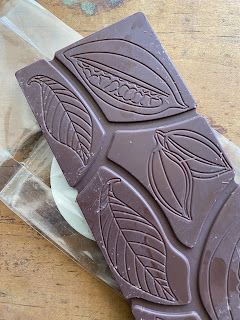 Flavor-wise, the barrel cactus seeds don't have a huge taste on their own. Maybe this is also because they are so small. They do somewhat enhance the earthier side of the chocolate, but mainly they contribute texture. They're much smaller and denser than crisped rice and they're not crunchy in the same way as nuts. In fact, the texture is much more like that of coffee beans, being that they are also a seed that we roast. It's a surprisingly great texture. Not that I was expecting it to be bad; I just didn't expect to enjoy it so much. As you can see, there is a medium amount of seeds on the chocolate, so it's just enough that you can lightly crunch each bite.

I tend to have mixed feelings about crunchy chocolate (that is, chocolate with nuts or something like that in it). Sometimes I enjoy it; other times it feels like it detracts from the chocolate. A lighter crunch like this, though, feels more natural. So what I thought would just be a fun gourmet novelty bar turned out to be quite wonderful.
Posted by Deanna Skaggs at 9:26 AM