In the Queen's Peril

Last year's Queen's Shadow by E.K. Johnston was apparently the Star Wars book that enough of us were waiting for that this year we have a prequel, Queen's Peril. Basically this one takes the things that people loved about the first book and spends more time with them. 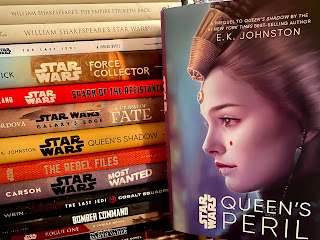 Instead of seeing Padme adjusting to her role of senator after being queen, this book shows the time shortly after her election to queen. We see Panaka's involvement in choosing the handmaidens--and also the way in which Padme and the handmaidens made plans without him. We see all the individual skills they each bring to the table and we see how they interact with Naboo's traditions as well as the growing awareness of a wider galaxy.

This story revels slightly in portraying Padme the teenager--specifically, the teenage girl. Being YA, it takes that approach of showing all the little details of a teenage girl's life because Star Wars or no, this is a book about teenage girls. Teenage girls who are central to their planet's government, but still. And that's pretty great.

I kept thinking of Padme and her handmaidens as a type of female comitatus. You go back to things like Beowulf or The Lord of the Rings where the king/leader has his loyal warriors who serve him. Padme and her handmaidens are like the female version of the fellowship of the Ring. They're a group that has gathered together for one purpose. They try to be equals and acknowledge everyone's individuality and voice but ultimately they are all there to serve Padme and she is the one who gets the final say because she is the queen. They, in particular Sabe, will submit to whatever is necessary, even when it means putting herself in direct peril by decoying as the queen.

Once again, I love reading about Padme because she's a terrific female character: she's warm and sensitive and intelligent and in good control of herself. It's only after she and Anakin choose their path together that she starts to become overwhelmed.

And last time, I mentioned that I was resolved to the fact that there would probably never be a book about Shmi Skywalker, we did get a few snippets from Shmi's perspective in here and for that I am grateful. So while this book may have been a little scattered (trying to show the early days after the election and then also trying to quickly retell The Phantom Menace from a new perspective) and maybe didn't always have the most flawless plot (I don't get the point of Sache's heroic role and how it actually helped), it was pure indulgence. Perhaps next we can can get a Padme book from the Clone Wars era?
Posted by Deanna Skaggs at 8:23 PM