Thanksgiving being now over, we are fully into the Christmas season. So I will continue with the holiday time offerings with OCHO. Unlike their Halloween variety bag, for winter each flavor comes in a separate bag. But given that two out of the three flavors I have already talked about, I'll just include them all in one review. After all, I will often choose not to do a review at all when it's just an existing product in seasonal packaging. 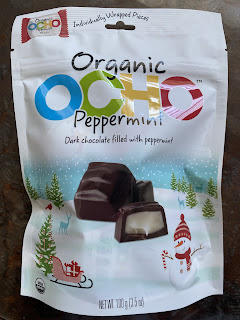 The first of the three, Peppermint, is completely new, though, and a timely comparison to last week's Peppermint Creme Bites from Chocolove. On first glance, the three bags look like they're all the same, but there are a couple of differences, the biggest of which appear on this one. The snowman and sleigh are on different sides and the pine tree is decorated with peppermint, with the snowman also holding a piece of the candy. So you could say this is the most festive of the three bags, though the individual wrappers are also the least festive. I'm not sure why on that last part: since this is a seasonal flavor, you would think that if anything it would have the most seasonal wrapper. 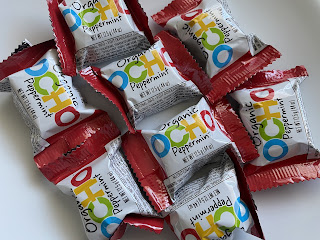 Not sure if this was just me, but while the other two bags each had ten pieces, the Peppermint bag only had eight. They were all priced at $3.99, which means $0.39 each and $0.49 each for the Peppermint candies. I like the first value more. 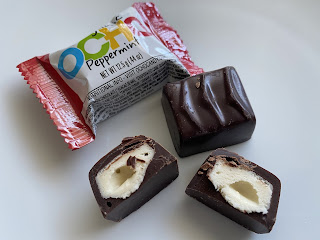 The candies are plain squares filled with a fluffy peppermint center. The peppermint is slightly chewy and almost nougat-like; it's quite a nice texture, probably the result of the egg whites in the ingredients list. I would say that it's perhaps slightly less minty than Chocolove's version; those are more of an after-dinner mint style, while these are chocolate mint candy. The sweet dark chocolate is comparable, though not so waxy and therefore more appealing to me than Chocolove's. So they're both nice, just slightly different from each other. 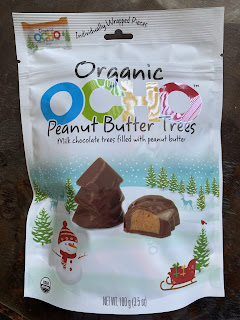 Both the Peanut Butter and Caramel flavors I have talked about before. The differences you can see in their bags are in the designs of the sleigh and in the placement of the robin, who sits on the tree in one and on the snowman's fingertips in the other. It's like playing one of those coloring book games to spot the difference between the pictures. 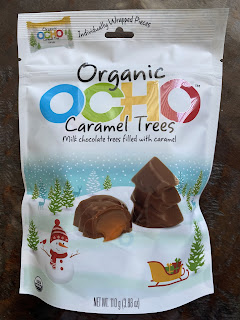 What I'm happy about is that there are still some pine trees on the individual wrappers, and the white dots on the colored part on top give the effect of falling snowflakes. That gives them a little more of a festive look to be ready for stockings or gifts. And once more we have a Christmas tree shape. This design is simpler than the one by Chocolove, and perhaps that is why these are also molded much more neatly. The lines of the branches all came out nice and clean and there is no denting. The only flaw is that the Peanut Butter trees have some light bloom on them, but the Caramel came out clean (which makes me think that, for once, this must have happened before they came into my care, otherwise wouldn't they both have it?) 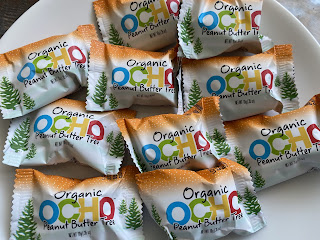 As I've mentioned, OCHO's Peanut Butter candy is alright but not necessarily their best out there, and their Caramel is pleasant and even a bit unique. Each filling goes all the way up into the tip of the tree so that the chocolate shell is a pretty even thickness throughout. So the proportions of chocolate to filling are good. With the Peanut Butter they felt pretty standard. With the Caramel, though, perhaps because caramel flows a big more freely, it felt like an indulgent little pocket of the vanilla goo. That's the way to fill up a chocolate Christmas tree. 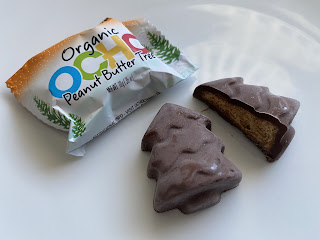 So whatever your favorite flavor (or your kids' favorite flavor) is, these chocolates can be a welcome part of your Christmas traditions (stockings have long been a favorite of mine). The biggest mystery remains why the Peppermint chocolates couldn't also be shaped like Christmas trees; then they would have easily b been my top suggestion of the three. 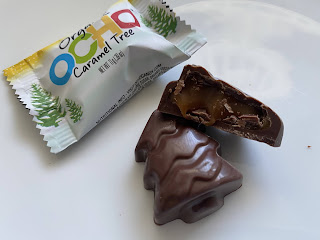