I know Theo best for their chocolate bars, but they make other chocolate products, too. Now that the weather is cooling off, I should soon be able to place an order for some of their flagship confections (which they normally only sell at their storefront but are offering online this year). And I'm also finally getting around to some of their chocolate cups--which have probably been around for long enough by this point that they're not considered new anymore. I've had Theo peanut butter cups, of course, but today I have their Peanut Butter & Jelly Cups and I'll follow next with the Coffee & Cream Cups. 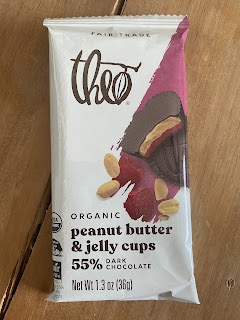 The packaging maintains that simple and clean style that is Theo's norm, though in a smaller and more casual look for candies versus chocolate bars. Like with the peanut butter cups, these are two slightly-heart-shaped cups that sit directly on the paper tray; there's no need for a wrapper because they're not so greasy as Reese's Cups. 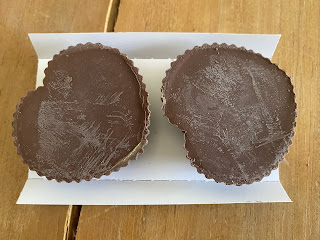 When I cut one of them open, I was somewhat surprised to find a barely noticeable amount of jelly hiding beneath the peanut butter. The little dash of dark liquid certainly looks nothing like the half-and-half of tan and red in the picture. But when does the real thing ever look like what the picture on front shows? Biting in, naturally I tasted the peanut butter and chocolate first, and then the jelly. Pleasantly, though, when the jelly comes (just half a beat later), it does hold its own. The balance is proper between the peanut butter and the jelly. It's also a pretty good balance of these two flavors with the chocolate itself. 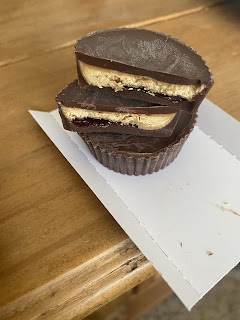 For me personally, though, there remain two issues. One is that this is raspberry jelly, and I'm still not overly fond of raspberry. But the fact that this smattering of raspberry jelly turns me off is in fact a good thing: it means that it does taste like raspberry. This isn't some artificial/catch-all, berry/fruit flavor. And I suppose they chose raspberry instead of the more traditional strawberry to give it a very slight twist (I say very slight because raspberry would probably be the next most common jelly after strawberry, right?).

While, again, the balance of flavors here is great and the concept is fun, I would only buy these again in milk chocolate and/or with a different flavored jelly. Granted, this is a better sweet dark chocolate than many I've come across. And while the dark chocolate is an issue for me, for someone else it might be a plus because that makes it vegan while still maintaining the sweet, candy tone.