If Theo's Peanut Butter and Jelly cups weren't so much to my personal tastes, the Coffee and Cream Cups are much more so. Instead of medium dark chocolate, here we have the dark milk chocolate that Theo does so well, their 45% milk chocolate. Add a coffee center and it all sounds much like the Double Silver Latte Bar from Zak's Chocolate--but the comparison perhaps should end there because that bar is pretty flawless and stands on its own (maybe the better comparison, anyway, would be to the Coffee Break Bar?). 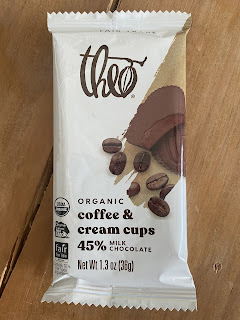 Inside the package are the same familiar heart-shaped chocolate cups, just in a paler shade than last time. The aroma is of, yes, coffee and cream. Pretty straightforward. Inside each cup, you will see that there is a darker color for the truffle-inspired inside. 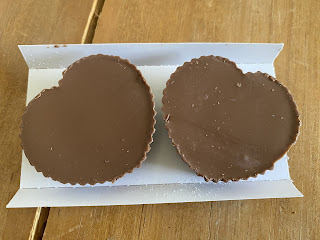 The coffee takes half a breath to appear in the taste, since it is just inside that truffle-like center. It's strong but only for the barest moment--and comes with a slight, almost bitter taste. So it is good to have the milk chocolate to temper it with those cream and sugar notes. I would also add that this isn't a particularly strong coffee flavor overall. 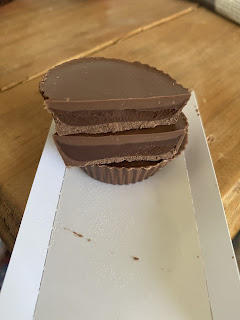 There is a smooth texture from the coconut oil that's used for that center filling. Here is one case where the use of coconut oil isn't to make the chocolate vegan: the outer chocolate is still regular milk chocolate, that is, with milk. Instead, the coconut oil is used in place of a cream product to give the chocolate a long shelf life (like what Alter Eco does so well with their truffles), as compared to using cheap palm oil or something like that. While generally this is a good method (despite all of my coconut oil bashing these days) and while it does contribute to a smooth texture, I find myself wondering if the somewhat bitter taste of the coffee is in fact due to the coconut oil. After all, it's listed as coffee infused coconut oil, further reinforcing the connection between the two.

Potential coconut bitterness aside, though, these are good chocolates. They're a casual indulgence. While I don't drink much coffee, it's one of those flavors, like hazelnut, that pairs so well with chocolate--especially when you add a creamy element like milk chocolate. The chocolate here, while being that creamy element, is also stable and rich enough on its own that it makes for a good and solid base and keeps it all from becoming cloying. Like with the Peanut Butter and Jelly Cups, the Coffee and Cream are angled at being adult chocolate candies.

Posted by Deanna Skaggs at 8:56 PM