I feel the need for a How the Grinch Stole Christmas moment--but in reference to Thanksgiving. I'm beginning to hear comments about skipping Thanksgiving this year and going straight to Christmas. If you want to put up your Christmas decorations now, go ahead and do what you like. But what is this talk about cancelling Thanksgiving?

Just as the Grinch learned that Christmas doesn't come from a store and isn't all about presents, Thanksgiving isn't just about giant groups of people and piles of food. Maybe this is easy for me to say because most of my Thanksgivings have been with only four to seven people (even just three once) and the biggest group one time was still under 30 (maybe under 20). But because I'm used to smaller gatherings, I can say that it still feels like Thanksgiving.

It doesn't matter what you eat, either. By saying that we shouldn't cancel Thanksgiving, I'm not advising anyone on what type of get-together to have. So if you're going to stay home and be just two people for Thanksgiving, maybe you don't want to make a turkey (you can even get a little chicken instead if you just want something smaller). That doesn't make it not Thanksgiving. You can have tuna salad by yourself and still celebrate Thanksgiving. It isn't about what you eat or how many people you are with.

Granted, I do hope that most people can be with at least a couple of others. And I'm all for a turkey and a pie at least. But those are details. 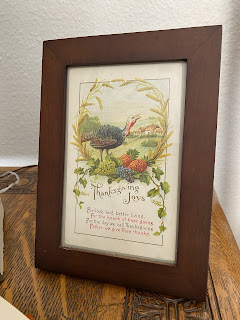 Thanksgiving a pretty holiday of culinary gatherings. But it is also a prayer; it is an entire day dedicated to a prayer of thanks. To give thanks requires no specific traditions. And so whether your Thanksgiving this year is spent gathered with your close family or by yourself putting up the last of your Christmas decorations and pausing for a canned soup, what I suggest is that we not forget to take a moment to give thanks. The sun in the sky, food on the table, and breath in our lungs, that is enough for us to pour out our thanksgiving.