Besides the Mesquite White Chocolate, this bar, the Blue Corn Atole White Chocolate, was the one I was most excited to try from Monsoon Chocolate. Now that I have, though, I'm left somewhat stumped. But let's start from the beginning. 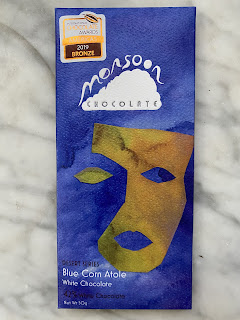 Though strong blues can be a bit too much sometimes, the blue clouds in this design actively portray clouds coming to water the crops to yield a harvest of blue corn for our chocolate. The back of the packaging gives us info about blue corn and the Pueblo tribes of Santa Ana, as well as some details about what atole is. Normally I think of atole as thickened hot chocolate--but its spices and consistency can vary, just so long as it does have that corn or masa thickener. I guess an atole chocolate bar should be a fairly natural idea, but this is certainly the first I've come across--and using blue corn is a further unique element. Unique but intriguing. 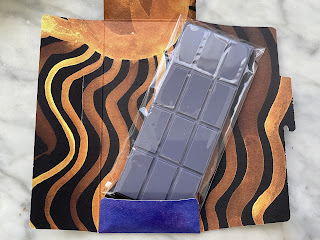 The Mesquite White Chocolate's color was fun to look at. By the time I got to this blue chocolate that is blue like the exact shade of blue cornmeal or blue cornbread batter, I was both amused and wondering if this was too much. Blue cornmeal white chocolate? Who ever heard of such a thing? I love the idea of it--but it's also a little out there. Here I will make note that the ingredients list purple pea flower, which can be used as a natural food dye. I'm guessing that the amount of cornmeal that would be necessary to color the chocolate was a greater proportion than what was needed to flavor it, hence the use of the purple pea flower. If my assumption is correct that this is the dye, I do regret that this isn't simply the natural color of the chocolate. Blue color adds to the novelty, but perhaps in the case of such a chocolate bar showcasing heritage Tamaya corn, sticking to the natural state would have fit in better than going for novelty. Even though it is the perfect shade of dusty blue. 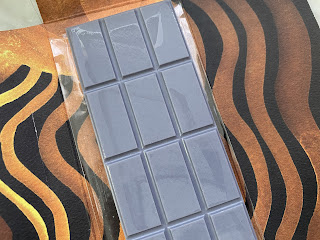 Once more, the aroma is of cocoa butter. Strong cocoa butter. The chocolate tastes sweet, like the sweetness of the corn. This is where I was somewhat reminded of the Corn Cookie from Monsoon's shop; that cookie also used corn to add to the sweetness, enabling a lower sugar content. There is a slight dustiness to the texture, more than with the Mesquite. The idea, so explains Monsoon, is to keep "just enough texture to enhance the perception of the delicate and floral qualities of the heirloom corn." Usually chocolate bars are showcasing the delicate qualities of the cocoa beans; again, I rather like the idea of also showcasing specific ingredients within the chocolate.

Blue corn is richer in flavor than other corn. I noticed that the time when I made corn mush/porridge out of blue cornmeal. So while I don't know how I would do on a blind taste test between blue corn white chocolate and yellow or white corn white chocolate, the corn flavor here is quite rich. Its flavor plus the cocoa butter also make it feel like a fairly sweet chocolate, despite this 45% white chocolate being lighter on the sugar than is normal for a white chocolate, as we discussed last time. It's definitely a sweeter experience than the Corn Cookie. 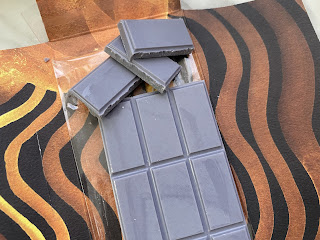 Really, eating this chocolate isn't entirely unlike eating blue cornbread; you just have the added chocolate texture and cocoa butter flavor added in. Which is a little weird. It's pleasant, but also quite weird. Even though corn is, for most people, more common to eat than mesquite is, this is a stranger bar of chocolate than the Mesquite. Yet it's also quite natural when you think about atole. Even if the average person in the U.S. may not have ever had atole, we're familiar with hot chocolate; and atole is a variation of hot chocolate, with this bar of chocolate being a spin on atole. So it's kind of an example of modern inspired by traditional.

I said that this chocolate bar has left me stumped because I find myself asking, why? I just gave the answer: it's chocolate inspired by atole. And it's white chocolate so that the corn can have space to not be overpowered by the flavor of chocolate. So then maybe the question should be, do I want this chocolate to exist? Obviously I do since I was so excited to try it. And I like all the conversations around it. It is pleasant to eat. But I don't know that I would buy it again, unless to have people try it. That seems to be what this chocolate bar is: a conversation piece. I used the word novelty earlier, and that's what this chocolate is. It's a novelty, though in a different sense than chocolate shaped like hammers or alligators. It's something you try for the pleasure of exploring. There is a possibility that the flavor grows on you over time (like that avocado ice cream with chiles and beet sauce from Sazon in Santa Fe that I found myself craving months after). But only time will tell that.

For now I'll simply say that I enjoyed trying this chocolate. It's unique in a good way, which is why it also placed at the International Chocolate Awards. But it's probably a one-time experience sort of thing.

Posted by Deanna Skaggs at 9:08 AM