While I had already established that Monsoon Chocolate could make a good, artisan dark chocolate, what I was most excited to try were their two flavored white chocolate bars. I am one of that small percentage of people who will say that I do enjoy a good white chocolate--and the flavors of these white chocolate bars are entirely unique. First up is the Mesquite White Chocolate, which is part of the Desert Series. You'll note that this is 45% cocoa content: that is high, not just for white chocolate, but even for if this were milk chocolate. Monsoon has a different way of doing things, and so far I like it. Given that this particular bar won silver at the International Chocolate Awards, I see that I'm not the only one. 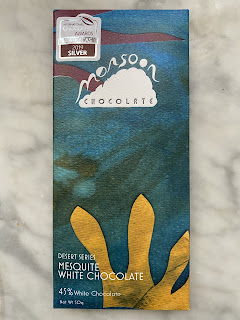 The coloring here is a deep blue with some tan shapes at the bottom reminiscent of plantlife. While they don't remind me of mesquite trees specifically, they do have that general flora feeling. Inside, the chocolate is the color of sand, similar to the color on the design. It's lighter and more yellow than what shows in the pictures--a bit more like straw and definitely not at all like either the usual white chocolate or milk chocolate. The color is, of course, simply from the mesquite. The only other ingredients here are cocoa butter, cane sugar, milk powder, butter, and salt. Normally the cocoa butter for this bar is from Camino Verde, which the back of the back informs me is just outside of Duran, Ecuador. Inside, however, is a small note that, due to supply shortages, this cocoa butter is sourced from Peru. As the border to Peru is not far from Duran, this is relatively not too far away--and in a context like this, I would imagine a difference of origin doesn't change things too much. 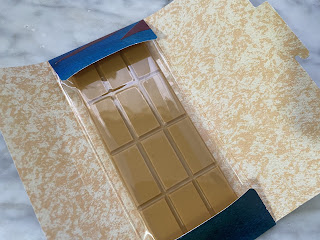 In comparison with the unusual color, the chocolate's aroma is simple: cocoa butter. It smells like a regular (good quality) white chocolate. But when I put it in my mouth, I didn't know what it tasted like. My mind couldn't supply words fast enough to keep up. I tried out sweet and buttery--but that didn't seem quite right. Slightly earthy? A bit. Past the halfway point, it gets a springy flavor, almost like a hint of fruit. Then the aftertaste is slightly dusty with the flavor of mesquite. 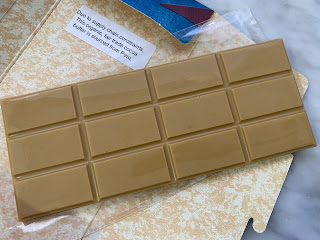 If I had done a blind taste test, I would be rather confused. Actually, I would have been confused even if it hadn't been blind--just if I hadn't been told what it is. There is such an interplay between expectation and perception. If it's white chocolate, it should be sweet. But if it's mesquite, it should be earthy. But it is sweet--but not extremely. It does taste a bit like caramel--but you ask yourself if that's just because of the color (it isn't). This chocolate tastes both warm, from the earthy mesquite, and cool, from the cocoa butter. It's intriguing.

I have had mesquite before, though never in chocolate--but still not enough that my mind instantly thinks of and recognizes the flavor. If I keep eating and get to a third piece, then I do start to taste mesquite more. It seems to take up to that point for me to settle into all of the flavor impulses and recognize what it is I'm eating. Mesquite-flavored white chocolate isn't something my brain is accustomed to pointing out. This would be a fun tourist find, as well as something pleasing for the percentage of locals who do normally eat mesquite. You don't have to recognize the flavor in order to enjoy it, though it's an added plus if you do because this is a unique way to find that flavor. The mesquite is from the San Xavier Cooperative Farm, which is run by the Tohono O'Odham, in Tucson.

There is an ever so slight dustiness hidden within the texture of the chocolate from the mesquite flour. It doesn't detract from the effect at all. This chocolate is still quite pleasantly buttery from both the butter and cocoa butter. Yet it isn't at all greasy, like most white chocolates. And as I alluded to, there is sweetness and yet it isn't strong. Again, the sweetness level isn't at nearly what it is for other white chocolates. Monsoon Chocolate has harnessed just the right level of sugar and butteriness to make a sweet chocolate that remains mild in its sweetness levels. And they've flavored it just right with the mesquite. I'm coming to know Monsoon for this handling of mild sweetness, for unique flavors, and for a gentle approach to what would otherwise be expected to be complex flavor. The Mesquite White Chocolate therefore comes with a high recommendation.