After stumbling across Monsoon Chocolate's Esmeraldas Ecuador bar early in the summer, I knew I had to make it over to Tucson to visit their shop in person. Summer hasn't seemed like the greatest time to go on a chocolate hunt, but it cooled down enough recently that it felt like finally time. And oh, now I have a new reason to go to Tucson more regularly. 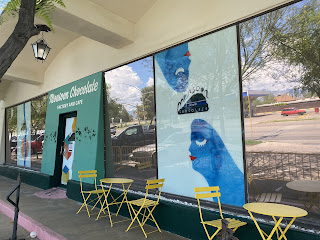 Their shop is located conveniently close to the freeway and with its own parking if you're just wanting to duck in and out quickly on the way to another destination. The familiar monsoon lady from the Esmeraldas bar decorates one side of the windows, while the design from their Ucayali Peru is featured on the other side. They're open on limited hours and space right now, but that was fine to go by and browse a bit and choose a few things to start with. I can always go back later. (So I kept telling myself.) 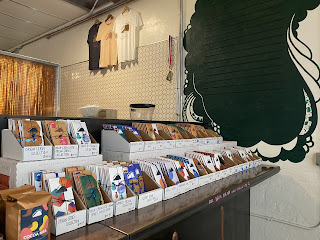 The display of chocolate bars is impressive. So many varieties. Dark chocolate of varying origins, as well as some dark milk, some milk chocolate, and the flavored white chocolate bars (which were at the top of my list). Maybe it was seeing them all lined up on the counter that made them so tempting. I wanted to choose them all. There were also cocoa nibs and chocolate-covered fruits, marshmallows, and malt balls. I didn't even ask for any truffles this time because I figured I was going to have enough on my hands already--and truffles will be better to transport in cooler weather, anyway.

I did, however, get the Corn Cookie and the Frocho drink. Maybe someone can explain to me why I didn't also get the Monsoon Cookie while I was there. Next time. Next time. 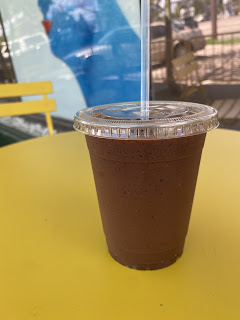 The Frocho I had seen online; they described it in store as being like liquid chocolate. If you ever wanted to be Augustus Gloop drinking from Willy Wonka's chocolate waterfall, here's your chance. They sprinkled a few cocoa nibs on top, which is a nice touch and ever so much better than whipped cream. I wish more people would agree with me on that. I really didn't know what to expect from this one. Would it be deathly dark and thick, too intense to drink? Would it be sweet? I didn't really get the latter impression. 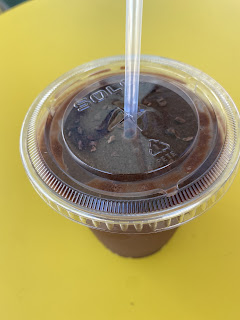 Turns out, it's neither one. I mean, this is all relative. Perhaps if you're accustomed to drinking frappuccinos, this will be too dark. But I'll say this: when I took the first sip, it wasn't as dark as I'd been expecting. It's just dark chocolate. So that's up to your own palette to decide whether or not that's too dark. It has sweetness, but also isn't overly sweet. That's also relative: I love the fact that this isn't super sweet, but maybe not everyone will. But it has no hint of bitterness, either. In fact, I find if fairly mild.

I suppose the closest comparison would be to chocolate milk--at least, compared with something like a shake. This isn't dairy, though. I didn't ask what the base is, but it seems like a water base to me. Yet it isn't like watered down chocolate either. It really is like a frozen hot chocolate. It's like hot chocolate--but cold. But a good hot chocolate. Not Nestle. And yet also not a thick drinking chocolate, either.

I will mention this. I only drank maybe a third of it, or maybe even a fourth, before then deciding to leave the rest in the car for later. I don't necessarily advise doing this and I doubt Monsoon would, either. But the fact that I did shows that you can. You see, besides the fact that it wasn't quite the time of day that I wanted to have a whole chocolate drink yet (but I had to stop into the shop when I did because later on they might have been closed for the day), I had also had enough chocolate for the moment and I didn't particularly love large quantities of the original texture. It was something like a slushy, with little chips of ice. Again, this is going to be a per person type of thing. But I really don't drink drinks like that. I don't even usually care for ice in general. So I found the texture of the ice chips distracting. I didn't exactly mind it, so I'm not saying it was a bad thing. But I did find myself enjoying the drink more later on, even the next day, when the ice had melted and it was just a cold beverage. The frozen style probably makes it into more of a "special drink," but my personal preference turns out to be simpler.

Tangent aside, I really enjoyed this drink and it's not quite like any other chocolate drink I've had before.

Now for that Corn Cookie. If I didn't know what to expect from the drink, how about from such a cookie? I mean, I love the idea of it. Corn is very Southwest, perfect for Monsoon Chocolate of Tucson. This one came home with me; it seemed still perfectly fresh the next day. It's a light-colored cookie with, surprise, sprinkles of cocoa nibs instead of chocolate chips. Fancy that. 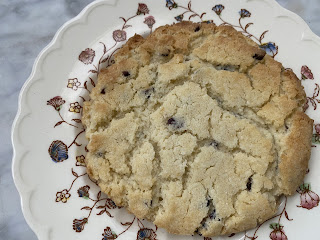 Texture-wise, this cookie is between hard and soft. It's a little crisper on the edges, of course, and a bit softer in the middle. Initially, its flavor is very light. That makes it a nice option after a flavor-heavy meal. Maybe after some Tucson enchiladas, eh? Or for those times when you're just craving something mild and not too sweet. Like during a Tucson hike?

That is, it is sweet--but just barely, kind of like a garnish. The sweetness has the feeling of coming from the corn, like it's more of a sweet corn flavor than a sugar flavor. And this cookie is probably not nearly as sweet as most cornbread when you get right to it; most cornbread is loaded with sugar and butter that make it more like cake than bread. This feels almost more traditional, if that's the right word.

The cocoa nibs are also quite interesting. At first, they fool your mind into thinking that they're just chocolate. Given that description I just gave of lower sweetness levels, your mind just goes right along with accepting a lower level of sweetness from the chocolate element, too. Not only are the nibs not as sweet as even semisweet chocolate chips would be, they're also not as dominant. The texture is vastly different, too. They're smaller and harder. That distinctive nib texture goes well with the crumbly texture of the cookie; it's quite unique but also pleasant. The texture of the cookie, then, is perfect for nibs: the effect wouldn't be the same with a softer cookie.

As I kept nibbling, I did start to get a little more of that cocoa nib specific flavor. What I call blue flavor notes ended up giving a loose impression of blueberries. So somehow even the cocoa nibs felt like they added a sweet note. If you've eaten straight cocoa nibs, you'll understand the irony of that statement. Nibs are not sweet. For its uniqueness and its delicate handling of flavors, this cookie is amazing. It's entirely unlike anything I've had before. If Chips Ahoy are not made with me in mind, this cookie is. It's wonderfully satisfying.

Whether you're local, in state, or visiting, Monsoon Chocolate is well worth a visit. Even if there were no chocolate bars, if this were just a cafe that happened to make a chocolate drink and a cocoa nib cookie, I would have been excited. And I still have four chocolate bars coming up next.