I said I had four chocolate bars from Monsoon Chocolate to look at--make that five with the addition of the Sonoran Sea Salt Milk Chocolate. The others are the two flavored white chocolate, a dark milk chocolate, and only one dark chocolate.  It's kind of an unusual selection, perhaps, when I should be eager to try more of their dark chocolate--but I like to try the unusual things first. 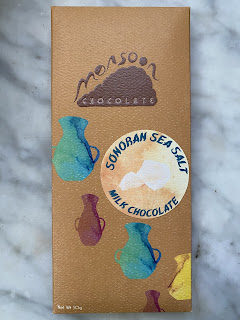 While there are variations in the packaging designs and art for each of the bars, the look here is also a bit of what I'd consider unusual. The monsoon cloud, you'll notice, changes color depending on whether a bar is white chocolate with a white cloud, milk chocolate with a light brown cloud, or dark chocolate with a black cloud. Colorfully clever. The coloring here of that light brown cloud with the warm tan background reminds me of clay, like you'd use to make the bright pottery featured. We have the same envelope style packaging as before, this time with a bright, striped pattern like geological layers. 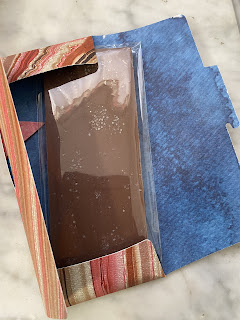 You'll notice a light dusting of salt on the back of the bar. Any slight imperfection in the surface is because I did, remember, get this chocolate in late morning and bring it home at late night in summer; I would say I kept it quite well, all that considered. The color is pale, which gave me the impression that this was a standard 30-something-percent milk chocolate rather than the darker percentages that bean to bar companies tend to favor when they dabble into milk chocolate. In fact, I assumed this even while eating the chocolate and only after looked it up and found that this is actually 42% cocoa content. I will freely admit that I find that surprising. 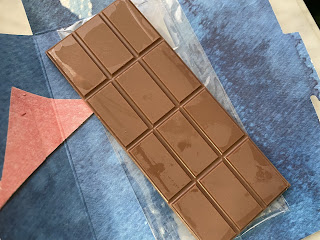 There is a slightly peppery aroma to the chocolate, though, that carries some into the flavor. As there is no lavender or bergamot, what I call a peppery quality would then be the flavor notes of the chocolate itself. So I suppose that is where we can find that this is a higher than average cocoa content, despite me calling it pale in color. 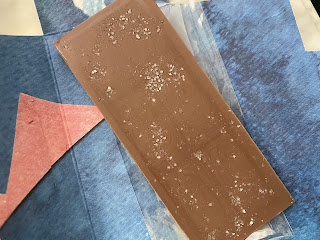 I tried the chocolate first salt side down because I wanted to make sure the salt got to feature. In this case, though, I don't know that it makes too much difference which side you go with. Usually salted chocolate is dark chocolate, yet naturally milk chocolate melts in the mouth much more quickly than dark. So while with a dark chocolate the salt will tend to melt faster than the chocolate (necessitating the correct placement of the salt to be able to taste it), in this case the chocolate melts a bit more quickly than the salt. So whether you start salt side down or salt side up, you will have some salt throughout the life of the chocolate and probably a tad at the end, as well. That in itself is a nice, subtle variation from a salted dark chocolate.
You'll tend to taste a burst of salt, then chocolate, and then some more salt. This is a full-on milky milk chocolate, creamy and sweet. Which is why I didn't think it was as high of a cocoa content as 42%. Usually those tend to feel a little darker, if darker is the right word. But this creamy sweetness is a good thing if you're a fan of that familiar style of milk chocolate, rather than the slightly darker and richer milk chocolates that bean to bar companies tend to make (if they delve into milk chocolate at all). We want to have all flavor/style options available from good cocoa from good companies, right? And by this, I don't mean to say that this is "average" milk chocolate; it's much nicer than average, but it simply has those familiar traits of sweetness and creaminess. Like I said earlier, though, there is flavor to this chocolate, which adds a pleasant nuance. The chocolate here is a blend of three origins: Esmeraldas Ecuador, Semuliki Forest Uganda, and Bejofo Estate Madagascar.
The sea salt is excellent. This is, Monsoon explains, wild harvested Tohono O'Odham salt from the Sonoran Flats at the Gulf of California. Why stop at giving details about cocoa origin? Let's hear about the featured ingredients, as well. I am in favor of such an approach, and of course Sonoran salt goes along with the Sonoran Desert specificity of Monsoon Chocolate. The salt is nice and tangy while also being light and crisp in flavor. It balances out the creaminess of the chocolate and comes in just the right proportion, neither too strong nor too subtle.
On the one hand, this seems like a simple and straightforward bar of chocolate. On the other, it has such a delicate and intentional approach to every detail that makes it quite unique and certainly delightful to devour.
Posted by Deanna Skaggs at 9:51 AM