A Thing of Beauty

"A thing of beauty is a joy forever," so starts John Keats's long poem Endymion. Keats himself was part of that era of appreciating beauty, particularly classical beauty and that found in nature. The pursuit of beauty of the Romantic poets, though not flawless, was at least more pure than that of the aesthetes. I don't think Oscar Wilde appreciated the types of things John Keats appreciated. Keats, at least, could appreciate a good nature walk.
You know, I've wandered through the McDowell Sonoran Preserve plenty of times in my day. But it took many visits before I happened to look to the side at the Gateway Trailhead and see a small stone, like a gravestone, with those very same Keats words carved on it: "A thing of beauty is a joy forever." Fitting words for a nature preserve, a section of land deliberately set aside for the preservation of its beauty. Keats probably never saw a saguaro or a creosote or an ocotillo. So perhaps it's a little random to include a John Keats quote in the Sonoran Desert. But I, for one, do not mind bringing some of the, let's call it, classical perspective into how we approach the desert today. 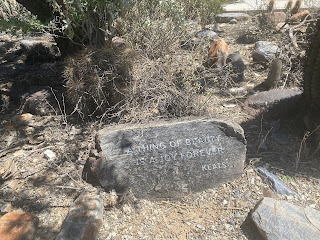 Keats wrote his "Ode to a Nightingale" in a completely different natural setting than the one in which I live. Yet I can sit and listen to the mourning doves and watch the quail go by in a similar state--the sort of melancholy ecstasy that he so well describes. I'm an advocate for enjoying whatever it is that you're able to enjoy where you are. Not that I wouldn't enjoy a trip to England. But I don't believe that beauty is so limited that I can only find it in certain places.
Like that Keats stone at the trailhead. I only had to take a look, to let my eye linger, to not rush by in order to see it. Don't rush by the hidden odes to English poets. Don't rush by the patch of late summer wildflowers. Don't rush by the extended greenery of the landscape after rain. Don't rush by the tortoise walking the edge of the path. Don't rush by the sparkle of starlight. Don't rush by the fingernail of the moon. Don't rush by the perfect shape of each leaf of that cultivated shrub on that cultivated landscape surrounding that city building.
For, after all, "a thing of beauty is a joy forever." The city building will not last. The cultivated landscape and shrub won't, either. But the shape of that leaf, crafted by the best designer, will not fade. There will be another leaf on another plant somewhere that will be its match, still crafted in such perfection. Even statues and vases that have been beloved for generations, well, sometimes they are destroyed. The memory of their loveliness sometimes does pass away. And so it is that the loveliness that continues to increase, as Keats describes it, I would say is that found in nature. It is nature that we can keep turning to with joy and awe. And its loveliness increases as our appreciation increases. Stay and linger and breathe it in.
Posted by Deanna Skaggs at 10:04 AM