"We've Been Searching Our Whole Lives"

Guess who I got to see last night--Blondfire (aka. "my indie band of choice" for a few years). 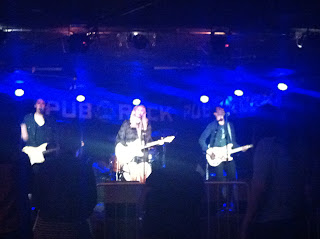 Although I knew that the brother-sister duo had been playing live with one or two other people, I was surprised not to see Bruce--he wasn't there and I just didn't see/recognize him, right? No, I think not. It would have completed it better to have both him and Erica, but I've been waiting long enough for Blondfire to come to Arizona that I'm not complaining. 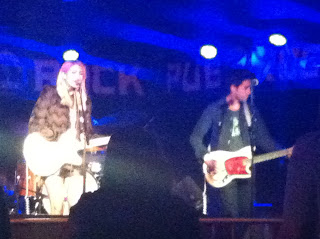 They opened with "Walking With Giants" and went on to play the other three songs from their new EP and a few from the upcoming album, Young Hearts, including the title track and a song titled "Kites." Erica's microphone could have been a little louder in comparison with the other sounds (it was loud--my eardrums took a while to get back to normal after leaving the venue), but I was still beyond thrilled. Blondfire also only played for half hour--if they had had more time, I would have loved to hear some of their older songs. But once again, it was wonderful to hear this music live after waiting so long.

After they played, I got Erica to sign my copy of their first full length album, My Someday. This album came out four and a half, almost five years ago, so I think it was a testament to my love of Blondfire that I even own the physical CD. 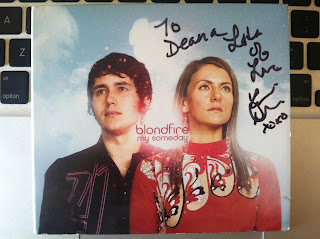 Oh, yes, and the quote in this post's title is from "Hide and Seek," which is a song I've really been enjoying.
Posted by Deanna Skaggs at 11:30 AM