Although I don't too often find one I'm entirely satisfied with, I do enjoy shakes. Usually I choose chocolate, or some sort of flavored chocolate. And then I entertain myself by complaining about how it tastes too milky or is too thick or not thick enough or whatever the case may be. So to find a chocolate bar called Malted Milkshake, well, I was happy about that. 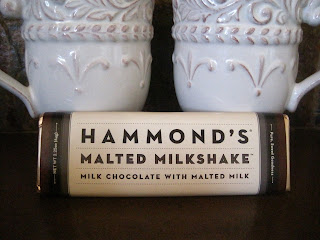 There are a few more flavors in stock at World Market right now. If I think well enough of this one, I'll try those, as well. But it's best to sample new lines slowly, lest I buy them all at once and hate them all. What I'm finding disappointing about this bar is that it isn't quite what I was expecting. The packaging is plain and vintage, but chic enough that I imagined Hammond's was a fairly new company. Instead, they have been around since 1920, with some more recent changes that have greatly increased the company's size. It's also a candy company rather than a chocolate company. Candy and candy stores are wonderful, but I usually like chocolate best when it is a company's only focus. 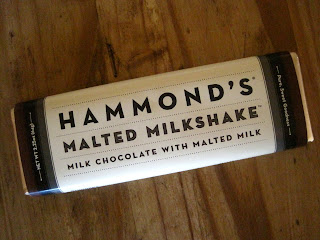 Whatever expectations I built up on my own, however, this is not a pretentious chocolate bar. "Milk chocolate with malted milk" sounds casual, something that can easily come from a candy company. The bar is in six pieces. There is, naturally, no cocoa percentage listed nor anything about the type of chocolate used. It's a light and milky variety. 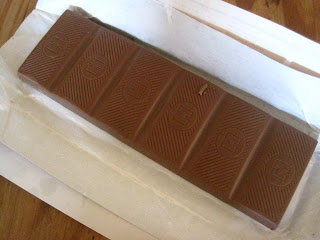 The bottom side of the chocolate shows all the pieces of malt balls that are added in. When seeing the bar, I didn't expect that it would necessarily have malt balls in it, just that flavor. What's nicer about this bar than traditional, chocolate-dipped malt balls is that there is much more chocolate than malt and the malt balls have an airier texture because they are in smaller pieces. Just these differences of proportion and size are worth seeing. 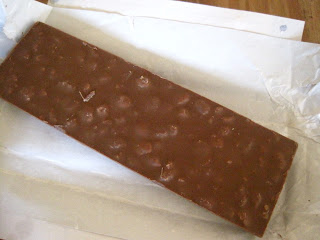 I'd classify this as a candy bar, or a confection; somehow "candy bar" seems only to apply to grocery store candies from the likes of Hershey's and Mars. It's the same type of thing, just a little cleaner cut. It's sweet and a tad nostalgic. I didn't fall in love with it as much as I would have liked, as hardly ever happens with milkshakes, either; the malt balls had too much of an artificial taste for that, and neither was the chocolate significant enough. But it's a pleasant sweet to nibble on and I do like the wrapper design. I wonder how they would be as party favors . . .

Posted by Deanna Skaggs at 5:48 PM