As I finish off with my last little gift from Santa Fe, we take a new turn toward drinking chocolate. I seem to only have been covering weirder incarnations of chocolate, as opposed to a plain and solid quality chocolate bar. Not that I'm calling drinking chocolate weird; in fact, it is heavenly and perhaps a more natural way to consume chocolate than as a bar. Part of chocolate's beauty is the way that it melts in your mouth, so drinking chocolate just simplifies the process. 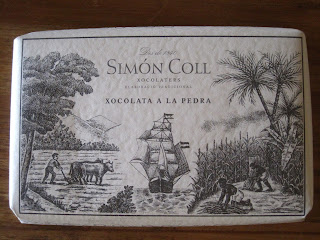 I didn't recognize the name Simón Coll, but I have in fact had contact with them, in a roundabout way. Back on Chocablog, I once reviewed a product by another Spanish company, Chocolate Amatller. It turns out that Simón Coll now owns Chocolate Amattler. They do share one thing in common: beautiful, historic packaging on certain products. I thought that the Xocolata A La Pedra packaging was nice, but gained more appreciation when I discovered that this same wrapper design has been on the market since 1880. Why change it when it's already perfect? 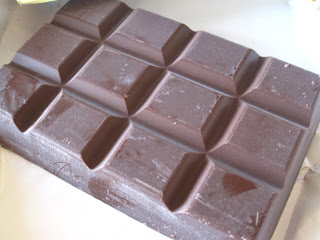 The bar is bulky and thick; it lets you know right away that it wasn't designed for eating straight. Being trusting, I followed the instructions on the back exactly. You heat milk (or almond beverage, in my case), remove it from the heat, add three squares of chocolate, stir them occasionally for two minutes, return to heat, and allow to boil so that it can thicken. Three fat squares plus a cup of milk means that each serving is big. Unless you're used to rich drinking chocolate, I would recommend that amount for two or maybe even three people. 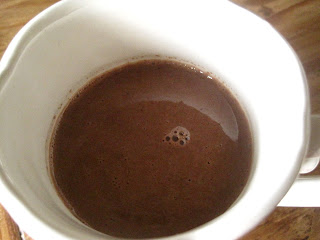 At about 45% cacao, this chocolate would be fairly light as a bar. But as drinking chocolate, the lower percentage keeps it from being too dark; I imagine it also helps keep the texture in control. While the drink is thick, it isn't mud thick. Sip it slowly and it feels just right. There is cinnamon added in, although I can't say that I tasted it much. I would call this drink neither sweet nor bitter, but if it leans more to one side, it would be toward the darker side. It's rich enough that I got nowhere near being able to finish off my "one serving." But maybe I'm just thinking in long term. If I used three squares each time, I'd only get four servings out of this bar; as it is, I can get eight to twelve. That's a week and a half of perfect, chocolate evenings.
Posted by Deanna Skaggs at 11:41 AM