They used to sell Girl Scouts cookies on campus sometimes; I almost bought a box once, until I got close enough to realize that they were $4 a box, which was more money than I had with me. Not that I had anything against the idea of giving $4 to Girl Scouts. But that's the thing, isn't it? When you buy a box of those cookies, you're donating more than you are purchasing. The Thin Mints are the most popular--and their quality is still in line with Little Debbie's, which are not $4. But they're still Thin Mints. We've all had them at some point and their association with child entrepreneurs makes them a bit of an American icon. Slightly. 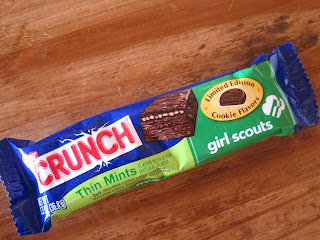 Now Nestle has paired up with the Girl Scouts, colliding their Crunch bar with the cookies. If someone offered me one of the other flavors, I would take it, but on my own I'm only interested in the Thin Mints variety. And I hope I don't disappoint any ex-Girl Scouts out there, but the Crunch bar version is better than the regular cookie version. Definitely. 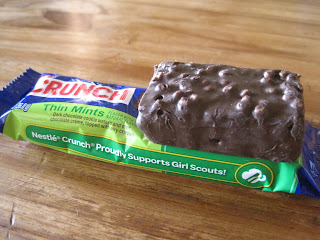 Don't misunderstand me, there are still plenty of cheap ingredients in these candy bars, from hydrogenated palm kernel oil to artificial flavors (surprisingly to me, there is in fact a little natural mint flavor, as well). But they have more chocolate and more texture than the cookies, due in large part to their fatter size. The candy bar is somewhere around the thickness of a Snickers. There are about three dark wafer layers wrapped in chocolate. The top chocolate layer, as you can see, comes studded with crisped rice--that appears to be the only Crunch-inspired element. Rather than coming in one bar, each packet contains two pieces. You can share, save one for later, or just pretend that they're two rectangular cookies.

The wafers and crisped rice give airy crunch to the bar, and the (oily) chocolate keeps it sweet. Unless my memory fails me, the level of minty flavor matches the Thin Mint cookies: ever present without being strong. It all strikes me as a less dry version of the cookies.

You know, even when I was hungry, I couldn't eat more than just one of the pieces; they're sweet. So they're not something I would want to buy all the time if they weren't Limited Edition. But as a one-time novelty, they're interesting. Do you think Girl Scouts would sell more or less if, instead of cookie boxes, they had candy bars like this to sell?
Posted by Deanna Skaggs at 3:20 PM