The Density of Xenocide

Click for my thoughts on the first two books: Ender's Game and Speaker for the Dead.

I really enjoyed the first book in this set and really liked the second. The third, however, became a little bit much. Xenocide is much longer than they were and I found it even more dense than Speaker for the Dead. If I'm honest, I'm a little disappointed that I didn't like it the way I liked the first two books. But let me explain why. 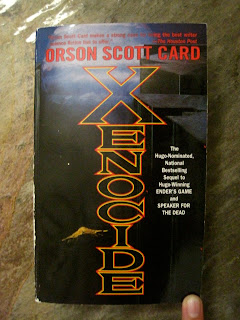 It was dense. Wonderfully so at times--I still found lines that I could have underlined, concepts that were well-worded, conversations and ponderings about ethics and life. Nothing is, at its center, simple; yet everything is so complex that, in the end, it is rather simple. Much more philosophical questions are in this book and also much more of a sci-fi feel--at least I thought so. The first books were about anti-gravity, space, and aliens, but this book included the long-winded descriptions of such things as philotes and computer communication and viruses and interplanetary travel. Not that any of this is bad; I certainly don't mean to say that.

I'm just pointing out that, after enjoying my foray into sci-fi for the first two books, I'm getting a little bogged down by the setting now. This is more the type of thing I would have expected, in some ways. So now that I've finally gotten through its pages, I think I'll give it a longer wait before I read the last book in this set (not the entire series, I know). You can tell how I felt about this book from the fact that I have so little to say on it: neither much praise nor much criticism. Maybe I'll finally get to the new Tolkien poem and some others that have been lying in wait. There is always much to read.
Posted by Deanna Skaggs at 6:26 PM