The Speaker Finds a Home

Oh, Ender. One of the most wonderful fictional characters I have met. How was I to know I was missing out so much by not reading Ender's Game earlier?

Reading it was enough of an impact that I had to wait a few days before beginning the sequel, Speaker for the Dead. If there be any need, let it be known that I don't know how to talk about this book without going into slight plot details. 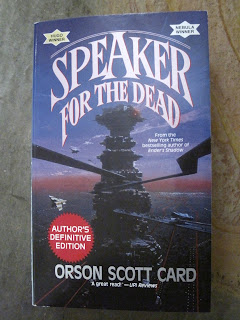 At first, I was resentful of the new setting and characters, until I realized that Ender was on his way back into the center of the plot. But by not starting with him in the center, the format builds up the importance of other people and relationships in his life--a full life cannot be focused solely on itself. To think of Ender nearly alone, hiding his past for so many years breaks my heart. Then to see him finally finding a place to call home, that was heartbreakingly sweet.

This book had so much to take in, both emotionally and philosophically. Or socially and politically. The format, combining elements of mystery, allows the reader to go through the questioning process. You question who the different characters are and who the different groups of characters are, as well as how they might best interact. You question the impact the past has on the present and the responsibility of the individual. It's the story of life and death, war and peace, aloneness and community.

I found myself quickly making comparisons as I read to things like C.S. Lewis's The Space Trilogy, The Host, and Star Wars (isn't Ender a bit like a Jedi?). But as generalizations, these are of course useless. My point is that elements in this book reminded me of elements, whether having to do with setting or characters, that I have enjoyed in other stories. The Ender's Game series is dressed up in the sci-fi packaging I don't usually reach for, which is one thing that kept me from reading it for so long. But at its heart, it isn't so very foreign to me, after all. I may need a few more days to finish taking in this book before I move on to the next one.

I match the book to Michelle Chamuel's cover of "Somewhere Only We Know."
Posted by Deanna Skaggs at 8:34 AM