Don't be silly. I've never eaten blackboard chalk. When I say I like eating chalk, I just mean that I like chalky candies.

Truth be told, I've always thought blackboard chalk looks delicious. Rather than chalking that up to a nutrient deficiency, I blame it on Fun Dip. You remember those white sticks that came in the packet for dipping in? I loved those. I would always eat the dip off of the stick carefully, not biting in, so that the stick would last until the end; then I could munch away at its chalky, sugary goodness.

Since then, I've discovered many more chalky candies. The Wonka Bottle Caps, for instance, are alright--except for the Root Beer flavor. 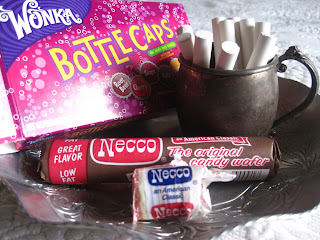 Smarties are included in the "cheaper" bags of candy, but they're one candy I really like. Eating the little pieces, trying to keep them in their shape, or gnawing on a big disc from one of the larger Smarties varieties. Although I never cared much for Sweethearts (maybe because I always tried chewing on them?), I do like the classic Necco wafers. Necco, if you weren't aware, also makes Sweethearts. But while Sweethearts are too easy to find every Valentine's Day, Necco wafers can be harder to track down. They're more of an old-fashioned candy, so you have to be on the lookout and just know who carries them. They're thin, wide circles that I like to let slowly dissolve in my mouth. The thinner they get, the harder it gets to resist the temptation of breaking them. The only flavor I don't like is, I believe, licorice. And if you're feeling silly, you can also buy a sleeve with just chocolate wafers. 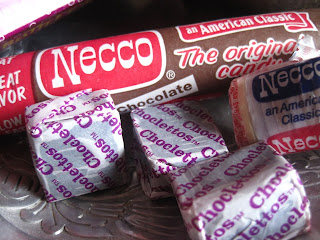 And that's why, although they are not chalky, I have included Choclettos. I picked up a few of them with the Necco wafers, some sour candy, and one or two other things at a candy store in Prescott. While Jelly Belly and some of these other brands may be fun, too, it's the vintage candy that tends to get me more excited. This store has both. The Choclettos are sort of like Tootsie Rolls in a square, only they taste more like brownies. They may also be slightly chewier. In a way, they're better. But one of the nice things about Tootsie Rolls can be their simple, barely-there flavor. With the Choclettos, you're eating something denser. It's more of a chocolate candy than Tootsie Rolls, so as similar as they are, they still answer to different candy wants.

Now the question is, if I eat chalky candy instead of chalk, would it also be alright to use chalky candy to write on my chalkboard?

Posted by Deanna Skaggs at 4:51 PM