I am perfectly aware that I photographed a maple chocolate alongside a white pine notepad. But I was looking for Canadian things--if I had my copy of Anne of Green Gables with me, that would've been great--and was coming up short. So I just went for the general tree theme. 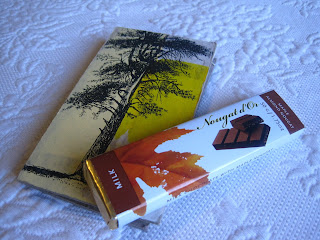 The thing is, I'm not feeling too excited about reacting to this chocolate bar: I'm not sure what to make of it. I did find it in the sale shelves at World Market (where else do I buy chocolate these days other than World Market?), so I perhaps should give it some leeway for not being as fresh as it once was. You can see that there is even a little scratch on the maple leaf on front of the package. 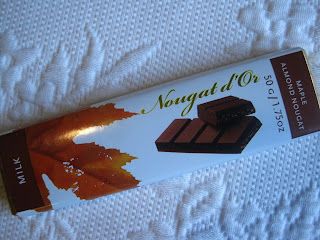 The chocolate is an unspecified milk chocolate. It's pretty light and pretty insignificant. I'd say that it at least tastes nutty, except that there are toasted almonds in the nougat, so that must be where the nutty flavor comes from. The chocolate is slightly crumbly, which I'm willing to write off as an effect of shopping the sale shelf. I still don't think it was terribly great to begin with, but I do like the maple nougat. 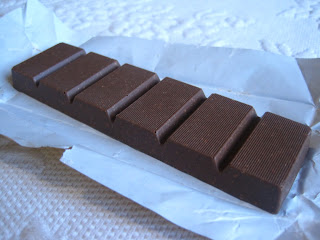 The chocolate bar's label says it's Canadian, so if anyone is going to handle a maple product, they'd better be the ones. The nougat contains toasted almonds, honey, corn syrup, egg whites, maple syrup, and natural maple flavor. Neither the best nor the worst list I've seen. Both the maple and almond come through strongly in the flavor. The almond gives the chocolate dimension and the maple gives it focus and originality. I still haven't come across many maple chocolates, but the flavor is pleasant. It's sweet and warm and can conjure up images of Christmas or old-fashioned candy or simply pancakes, depending on what it reminds you of. 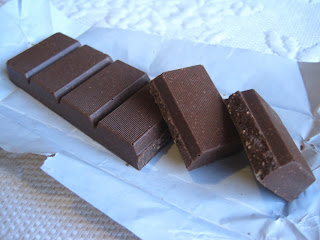 Just for the successful maple nougat, this bar is worth it. If the chocolate were better, I might even call it a favorite. If it came in decorative packaging or holiday shapes, I might even give it as little presents when December comes along.

Posted by Deanna Skaggs at 5:59 PM