It's usually very hard to find chocolate on the Disneyland Resort. Chocolate cookies and chocolate-dipped ice cream abound, but otherwise there is very little. Sometimes you can find the Mickey Mouse milk and dark chocolate bars, and this time there were also the chocolate mints I went over already. Further, the collection of character-based candy boxes were all very chocolate-centered when I examined them at World of Disney. I got one. Then I came back and got another. Come on, it's Disney and chocolate put together: I couldn't resist. 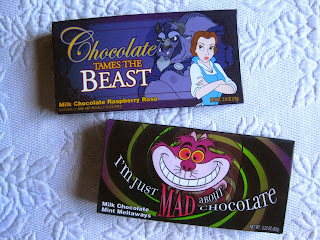 At six dollars for 79 grams in the first box and 92 grams in the second, we know this stuff is vastly overpriced. Sure, the boxes are cute and fun and I enjoyed finding my favorite designs/characters, but they're just cardboard boxes. If they were reusable, a higher price could be justified. As it is, the price justification falls to the chocolate and I knew before I opened the boxes that they wouldn't be worth it. The Beauty and the Beast box has Milk Chocolate Raspberry Rose. I was pleasantly surprised to find that there are eight chocolates inside, sitting in a plastic tray and formed in rose molds. Because I wasn't expecting any sort of shape to the molds, I did find them rather pretty. "Rose," then, refers to shape and not to flavor. The flavor is simply artificial raspberry; we all know what that tastes like. The inside of the roses has a candy version of chocolate ganache that adds some casual interest to the chocolates. 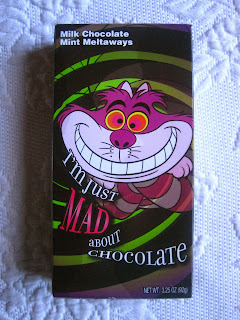 While the Alice in Wonderland Milk Chocolate Mint Meltaways use peppermint oil instead of artificial mint, this is one of the few cases where you will find mint in milk chocolate instead of dark. There's a reason why most companies will at least make a mild, sweet dark chocolate for mint instead of simply putting it in milk chocolate. Milk chocolate and mint, most often, are too cloying together, and this case is no exception. Because of the combination, this mint doesn't even taste fresh. There is also no theming to the molds here: simple rectangles bear the likeness of Mickey Mouse instead of something in the Alice theming. The same faux ganache (or "dark confection," as the ingredients list calls it) sits in the center.

I realize that the average visitor to Disneyland is not nearly such a chocolate snob as I am. But there are candy chocolates that taste good (like Reese's Cups and Nestle KitKats), and I don't think I am the only one who would enjoy having more chocolate options (just imagine a collaboration with Ghirardelli, at least). Maybe if I keep buying all the filler chocolate just because I can't resist the boxes, Disney will get the hint that there is demand in the chocolate world?