Okay, so I was in Anaheim again (all is right in the world!). And naturally, the first thing I bought was this little tin of Chocolate Mints. There isn't a huge amount of chocolate on the Disneyland Resort, so I went for whatever I came across (except for the chocolate martini many of the hotel restaurants serve--the time for it never came). The tin is a standard Altoids size, just slightly on the vintage side of style. On the side of the lid, you'll find the label "Good ol' fashioned flavor." 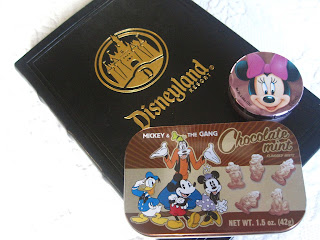 Maybe, for once, the label's right. There are only five ingredients, with cocoa powder and peppermint oil giving the flavor and sorbitol acting as sweetener. For a candy, that's not terrible--though I would have preferred straight sugar instead of sorbitol. But mainly it's the fact that there are cocoa powder and peppermint oil in here instead of artificial chocolate and mint flavors that impresses me: artificial flavor are much too overused. 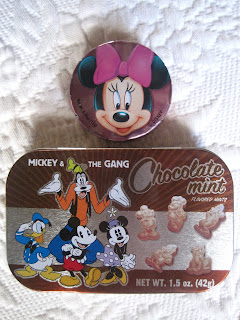 The mints are in the shape of different characters. When they're all in a bundle, it's hard to distinguish them. You can, however, just make out Mickey and Minnie standing there on top. What's cute about the molds is that they're front and back. Turn Donald around and you can see his back as if he were a doll instead of a mint. I do think the matte, grainy color isn't terribly appealing--but I suppose it's better to keep it than to add a ton of colorings. Though they remind me of the Flintstones vitamins I got sometimes when I was young, the mints aren't chewable until you're sucked on them for a moment. They're also not terribly minty. It's more of a chocolate flavor, but a flavor closer to the bitter side, considering that it comes from cocoa powder. Definitely more often going to be a mint for adults. I wouldn't call them great; they're okay, but I still like them more for the idea than anything. 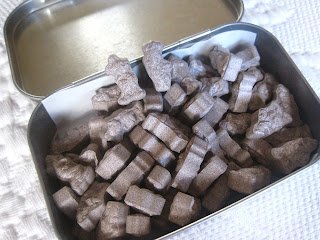 The Minnie Mouse container is the kind you open by pressing the top and close by pressing in on the sides. It isn't chocolate, but I got it anyway with the idea of keeping it in my purse with other mints or candies or even Advil or something. It's that kind of small size that won't get in your way. The back says that there is fruit hard candy inside. I was picturing something clear. But instead we have these chalk-colored circles: 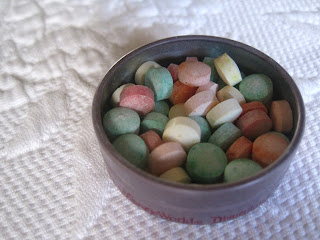 Now, I know I confessed to liking chalky candy. But these can hardly count in that category. They're harder and chewier than my usual chalk candies, so the texture is already different from what I tend to like. Plus they taste terrible. Terrible. Horrible. If I don't throw the rest away, I'm crazy. I thought maybe it was just one flavor, so I had to eat all the different colors. Some do taste better or worse than others, but they all taste like pine cleaner. Come on, Disney, have a little more respect for your customers. We both know that we'll buy something like this just because it's Disney, but at least have the decency to make it edible. Make a deal with Smarties and put Smarties in here. Or something from Necco. Just not this. 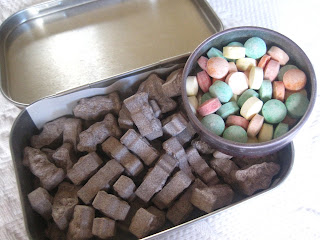 Oh, well. At least I have the luxury of being able to complain about what I bought at World of Disney (you know, the shop on Downtown Disney). I love that never-ending store.

Posted by Deanna Skaggs at 3:48 PM