As you can see, I have been scattered of late, hence the slower pace of posting. Strange thing is, I would sometimes post more when I was supposedly so busy with college; the reason for this, though, was that I was always on the computer and would start posts while procrastinating on schoolwork. Anyway, today I am just doing a quick run-through of my Disney pin collection. I used to think I had a lot, until I saw one or two other pin collections. The only extreme thing about my collection is that, up until now, I have always worn all of them when visiting the parks. Yessir, that's two full lanyards on one five foot person. Come on, I'm used to wearing lots of necklaces, anyway.

I used to keep the pins in order, but I've had to change that lately. I also used to just get one pin per day I spent in the parks. That changed. I got five pins just this last time because I was having so much fun and kept going back for more. Oh, yes, and one more thing: I never trade my pins. I know it's called Disney Pin Trading, but once I have a pin I've picked out, I don't want to part with it; they're my pins and I want to keep them. 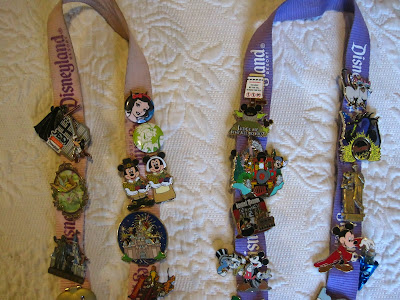 We'll start with the pink lanyard's top left side and go down, then back up. Then we'll do the same with the purple lanyard, aye? Next time I'm around, I'll need to get a third lanyard (I don't really want to put them in one of the pin books). And I'll have to choose just one lanyard's worth of pins to wear at once. 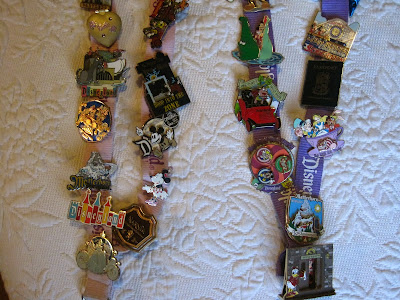 The first pin is for the Jedi Training Academy, but I got it because I've been loving all the Star Wars pins around lately. Star Wars and Disney together? Yes, please--within bounds, that is. Next is the Tinkerbell pin, which is one of the first five I got, along with the Partners statue of Walt Disney and Mickey Mouse standing in front of the castle (classic Disney magic), the heart locket with Belle inside, the Pirates of the Caribbean dog with the ship in the background (Pirates was one of my favorite rides at this time), and the Cinderella pin at the bottom. Below the pirates pin is a celebratory circle for the 50th anniversary, during which I went at least three times. Then there is a little Matterhorn pin and the classic Disneyland sign pin, which I got this last time.

Moving back up is a Narnia pin, which flips over to have Aslan on the back. Another meeting of worlds: Disney and Narnia. Then a little Minnie Mouse and a classic Mickey Mouse. Above that are the Tower of Terror, with a moveable elevator shaft, and the fire engine from Main St. Then there is the castle with a rotating background of fireworks. You can also see Mickey and Minnie dressed as pilgrims; I would have preferred a turkey pin, but I love Thanksgiving, so I had to get this one last week. I also picked up the two little button pins from a bowl on the counter: Snow White for classicism and the Mad Hatter for absurdism.

On to the purple lanyard, beginning with another Star Wars pin that I got earlier this summer. It's Yoda looking up at a height limit sign and remarking about judging based on size; as a short person, I felt drawn to it, I suppose. Then the animated crew is riding on one of the trains (this is the same pin I put against Robyn Schneider's book a few days ago). Next come the Haunted Mansion and Mickey dressed as a magician, pulling Donald out of a hat. The next two are some of my favorites: the crocodile from Peter Pan, eating Captain Hook, and Mr. Toad, complete with a moveable car. Then come the Teacups, fully spinnable--this was one pin I remember wanting for a while. Another Matterhorn pin commemorate its 50th anniversary. At the bottom is a nice and big Tower of Terror pin, with Donald ushering you into the moveable doors. Alice and Company sit back in another Teacups pin, above which sits a Disneyland Resort passport for Mickey Mouse. California Screamin' has its own moveable car, and Mickey as the Sorceror's apprentice holds a 3D hat with magic inside. Above that is DCA's Storytellers statue of a younger Walt and Mickey, newly arrived in California. Then Maleficent advertises Fantasmic and the two Siamese cats from Lady and the Tramp pose together. I like those cats almost as much as the crocodile, so I was excited to find them even though their pin is flat and, as you can see, I much prefer 3D pin. Moveable parts, raised layers, and uniqueness are what I love. And pins take up much less space than other things you can buy at DL.

Posted by Deanna Skaggs at 6:30 PM