As I mentioned before, I read only the first ten books in A Series of Unfortunate Events years ago and have only now picked up the complete set to read from start to finish, plus Lemony Snicket: The Unauthorized Autobiography and The Beatrice Letters. Back then, my interest in the series grew as I read along, delving deeper into the mystery and getting more used to the quirky narrative style. But this time I enjoyed myself more. 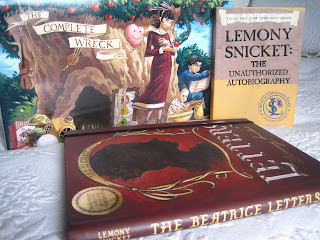 Part of the reason for this is that I know just a tad more now than I did then. We all know that the series, instead of simply being an accumulation of ridiculousness, also has quite a few references to other things. I got some of them before. But surely I got many more this time. (The Virginian Wolfsnake that you're not supposed to let near a typewriter . . . that one's hilarious.) Also, having more of an idea of the type of story helps you enjoy it for what it is. It's comedy, it's Gothic, it's silly, it's punny, it's dramatic, and a little mysterious. It's really a fabulous series. What I couldn't imagine was how such a thing would end. What kind of an ending do you give something like this?

Everyone else discovered the answer long before I did, of course. The ending wasn't quite what I wanted . . . and I didn't know what to expect . . . but I really like it. It doesn't give the final accumulation of answers I was hoping for, but that's part of the theme. The final page of a book will forever be what breaks the spell of fiction (what breaks the spell that fiction is reality); yet by admitting that one book cannot contain everything, fiction can sometimes in fact be more realistic. Thematically, this series reaches an incredible and poignant final realization or moment. Somehow, the island and what the Baudelaires feel there reminds me of the end of The Voyage of the Dawn Treader (which, you will recall, is part of The Chronicles of Narnia). I'm thinking specifically of when the characters take the boat out to sail over the white lilies. There is a feeling of calmness, of comfort, and of completion that does not need to be accompanied by the world's definition of safety and completeness. It's a very personal, kind of spiritual feeling.

One final note. I read the Lemony Snicket autobiography quickly. Because it came out before the whole series had been published, I think perhaps it must have been more interesting then than now. Now, it didn't offer me too many answer to my questions and so I wasn't quite sure what to do with it. The Beatrice Letters, on the other hand, was fantastic. It's mysterious and funny and I'm not quite sure what to make of everything in it, either--but in a good way. It introduces more questions than it answers, but it was delightful all the same.

Alright, that will do. A voyage for the imagination, the mind, and the heart.
Posted by Deanna Skaggs at 5:00 PM