Sometimes I like to complain about how never mind all the places in the world and the country that I have never seen, there are so many places in my own state where I have never been. Picacho Peak State Park was one of those places where I had been wanting to go for a few years. It isn't that far . . . and when I was around the Phoenix area it was only an hour or so away . . . but it's still a long drive, especially since I am no longer around the Phoenix area. But last weekend I finally made it over. 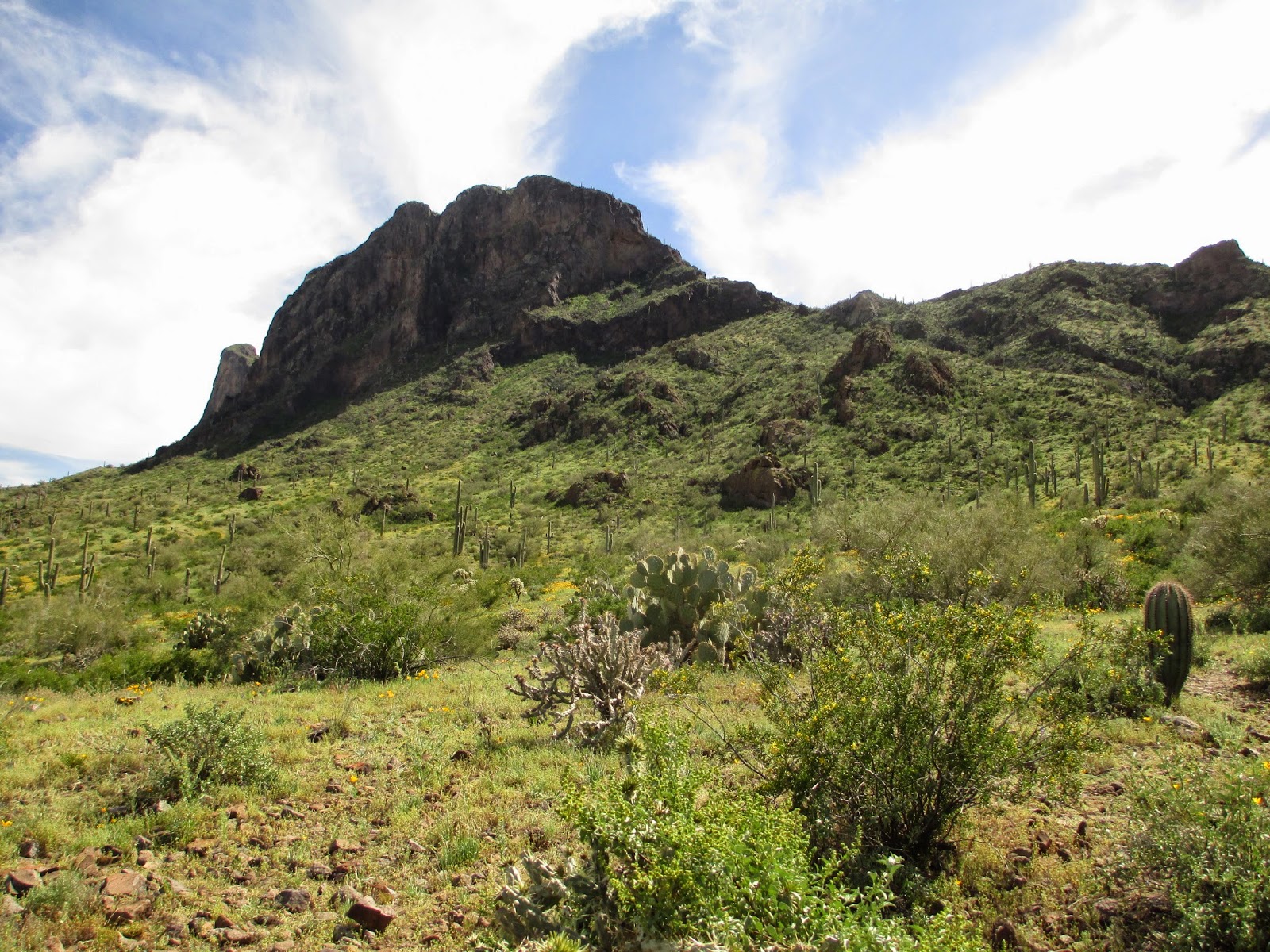 I don't think I had even heard much of the place until I read The Host--which is kind of ironic that a mainstream book would remind me of something in my own state. Then lately it seems like I've been hearing so much about how pretty the wildflowers there are in spring. I've seen pictures (better than any of the pictures I took, too, I might add), but I really wanted to be there in person. So we planned out trip for March. It was absolutely perfect timing. It's been such a wet winter that there were lots of flowers out and we also came just in time for mild weather. It was about 80 degrees when we were there; this weekend I think it's about 90. Perfect timing. 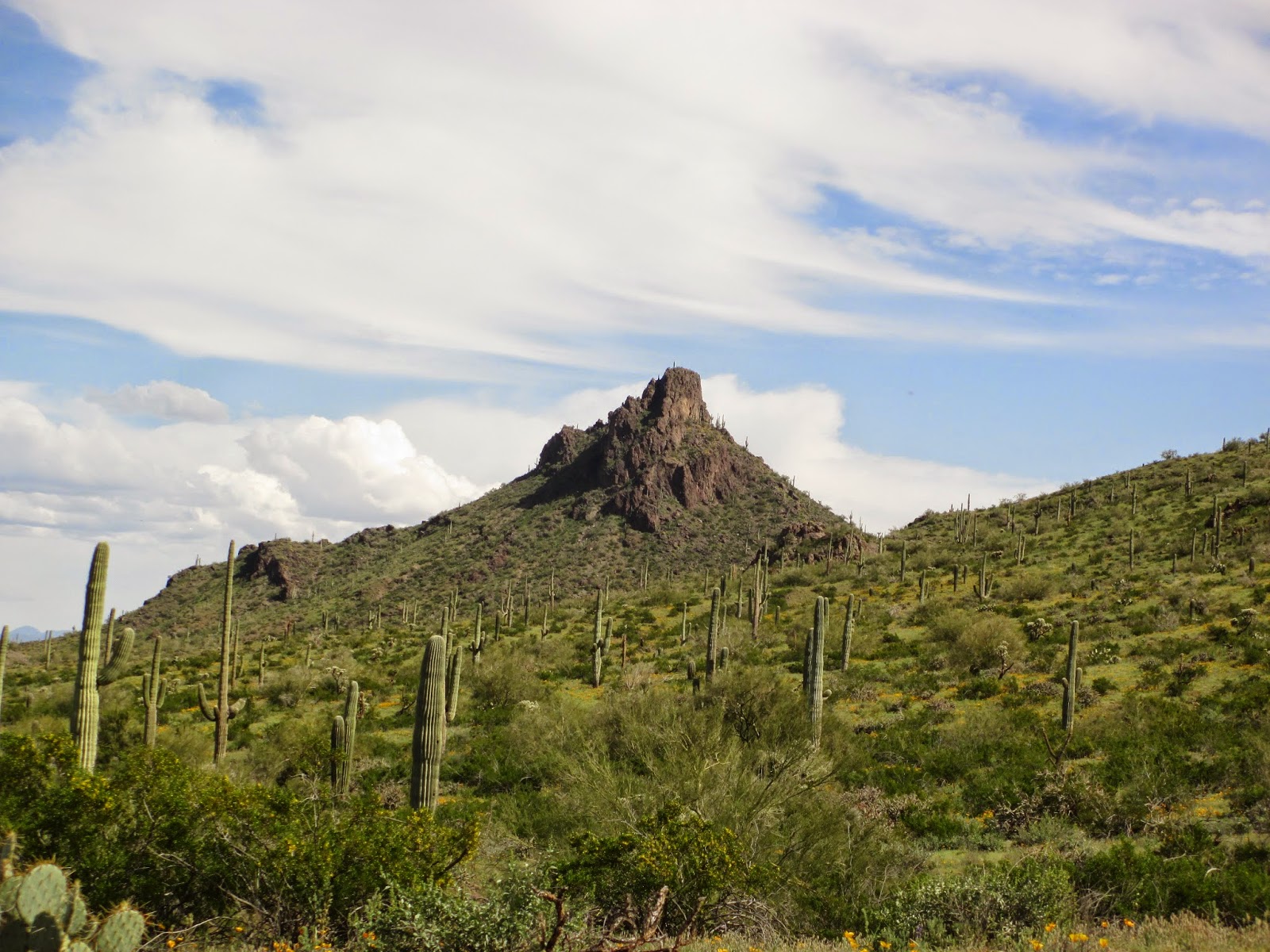 The first view was our view from our picnic table; I think the above picture was from the same location, just pointing over to the left. We kind of didn't leave that early, so it was already lunchtime by the time we got there. So we took time over lunch, lingering around the table afterwards. If you've driven through this general area, you'll have observed that the plants tend to grow more on slopes than on the flat areas. Picacho Peak is part of a little ridge of sorts and the park is set up around this small line of mini mountains, so the cactus are growing all over. Saguaro and prickly pear and cholla. Especially with it being spring, everything was so very green. Add the wildflowers to that and it was just gorgeous. 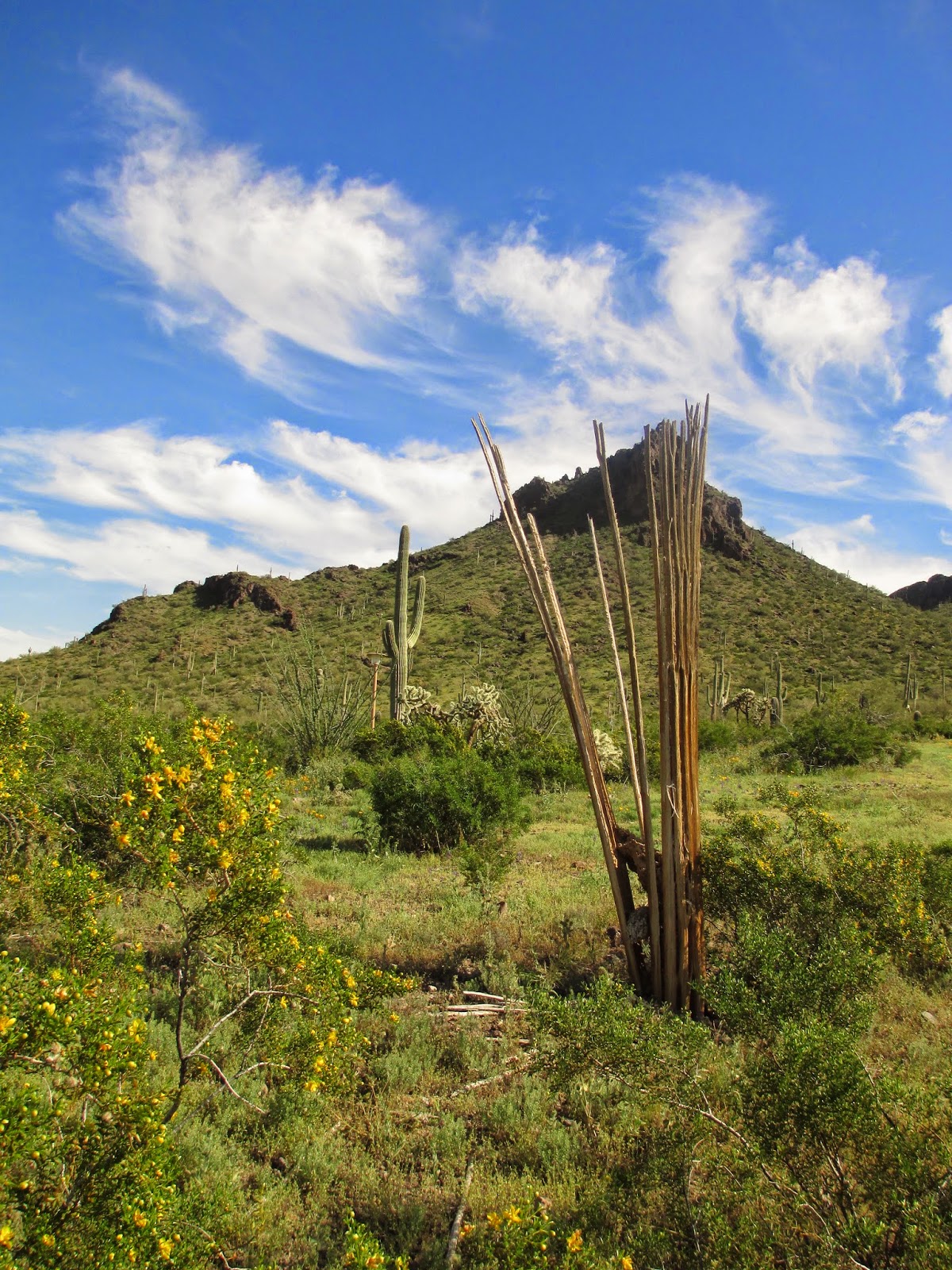 Don't make fun of us, but the only trail we walked was the Nature Trail (unless maybe we also walked partially on another one? I'm not sure). It was afternoon by this point (you know, the hottest part of the day) and we did have that long drive back afterwards and everything felt to pretty for anything other than a casual stroll. I mean, it was never the plan to go on Hunter Trail, anyway--that's the steep trail up to the peak with steel cables to help you along through certain sections. 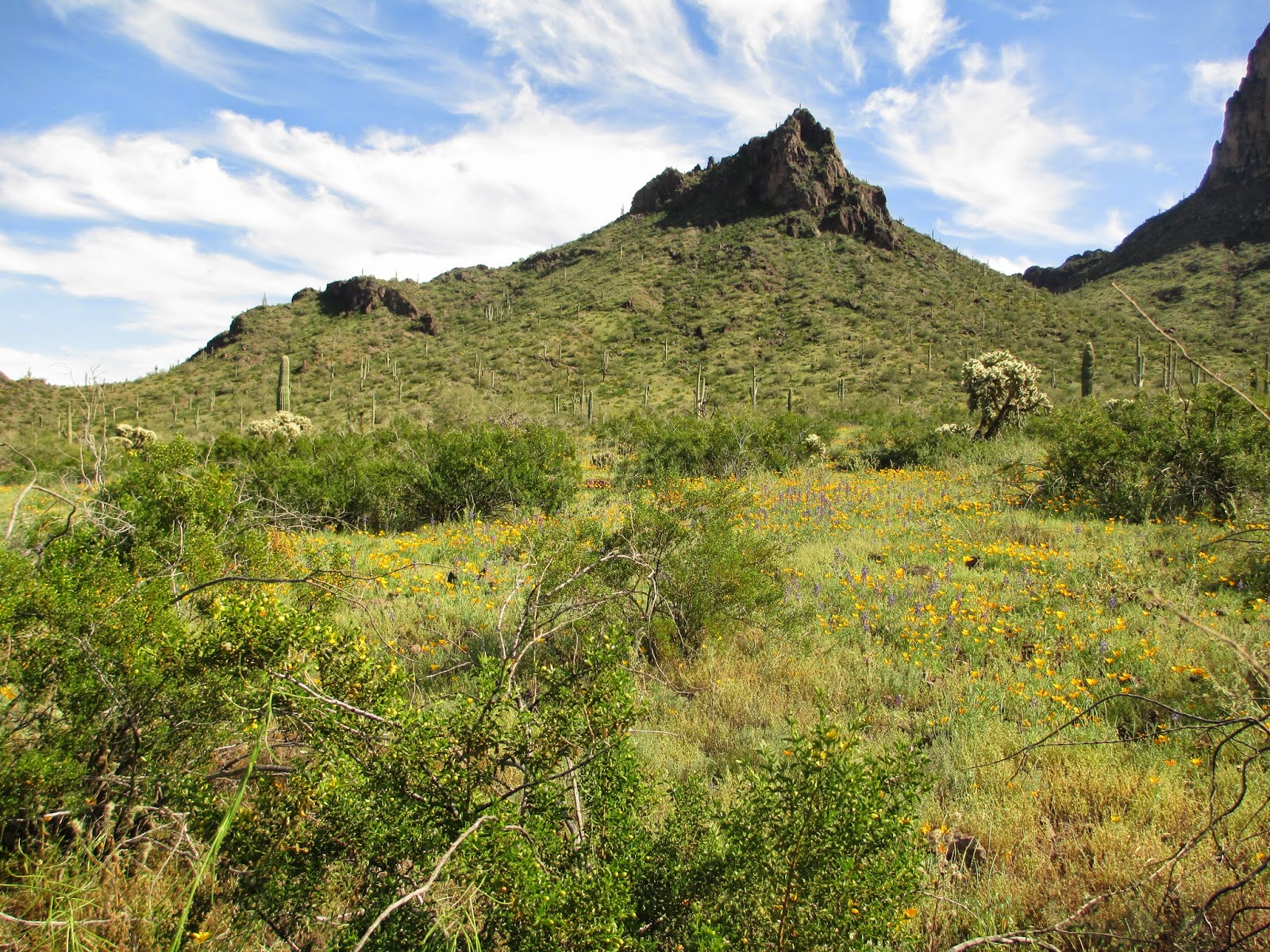 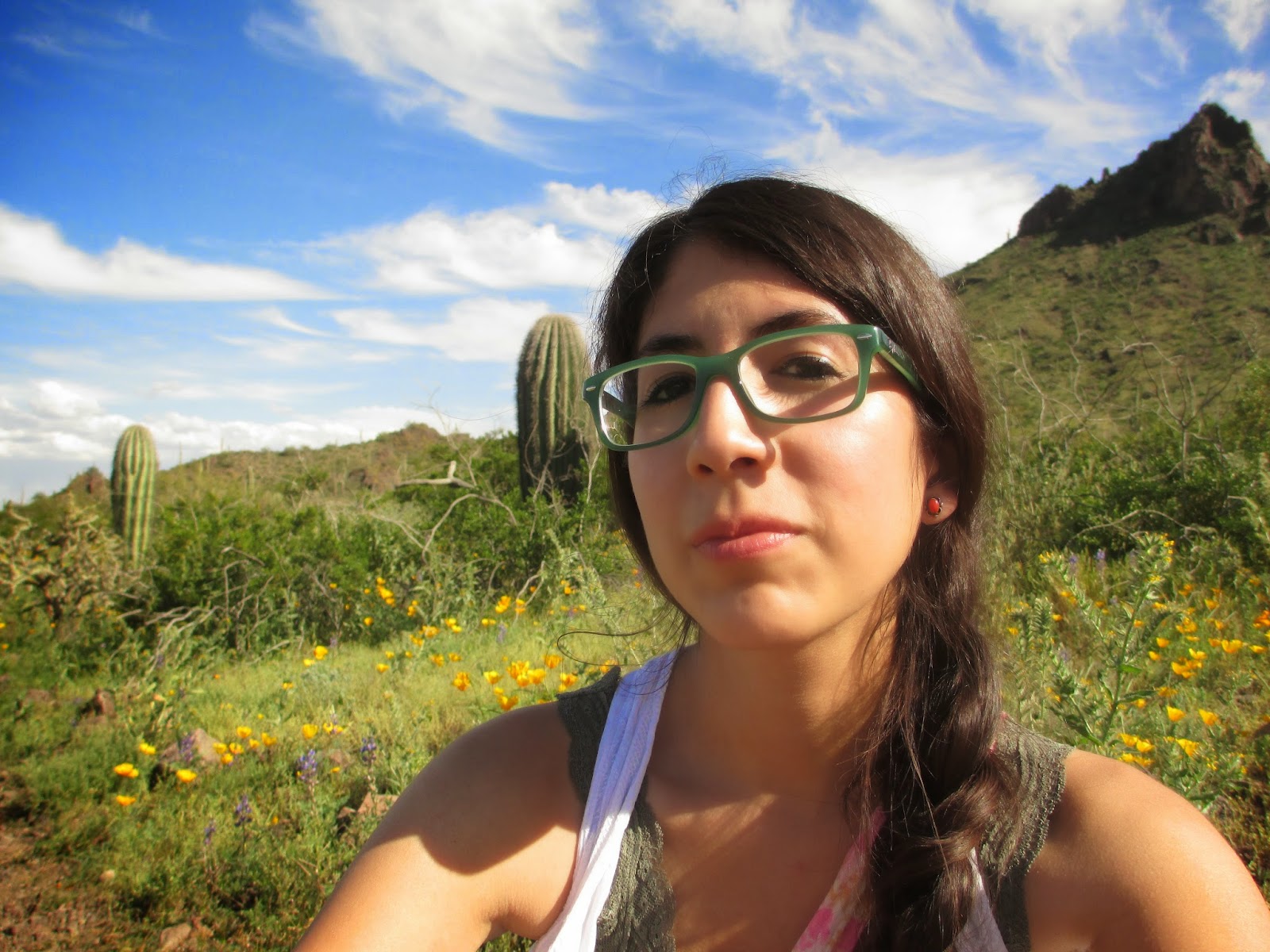 We were all dressed for a casual day, anyway. I wore sandals (a little more walking/outdoor style), long shorts, and a white open shirt over a tank top (white is a must--I was surprised to see quite a few people in gray or even black) with my hair in a side braid. Do you know those cloth bags Free People gives out? They're perfect for outdoor days; just throw in a water bottle, lip balm (I used Fresh's Sugar balm in Petal), and whatever else you need and sling it over your shoulder. 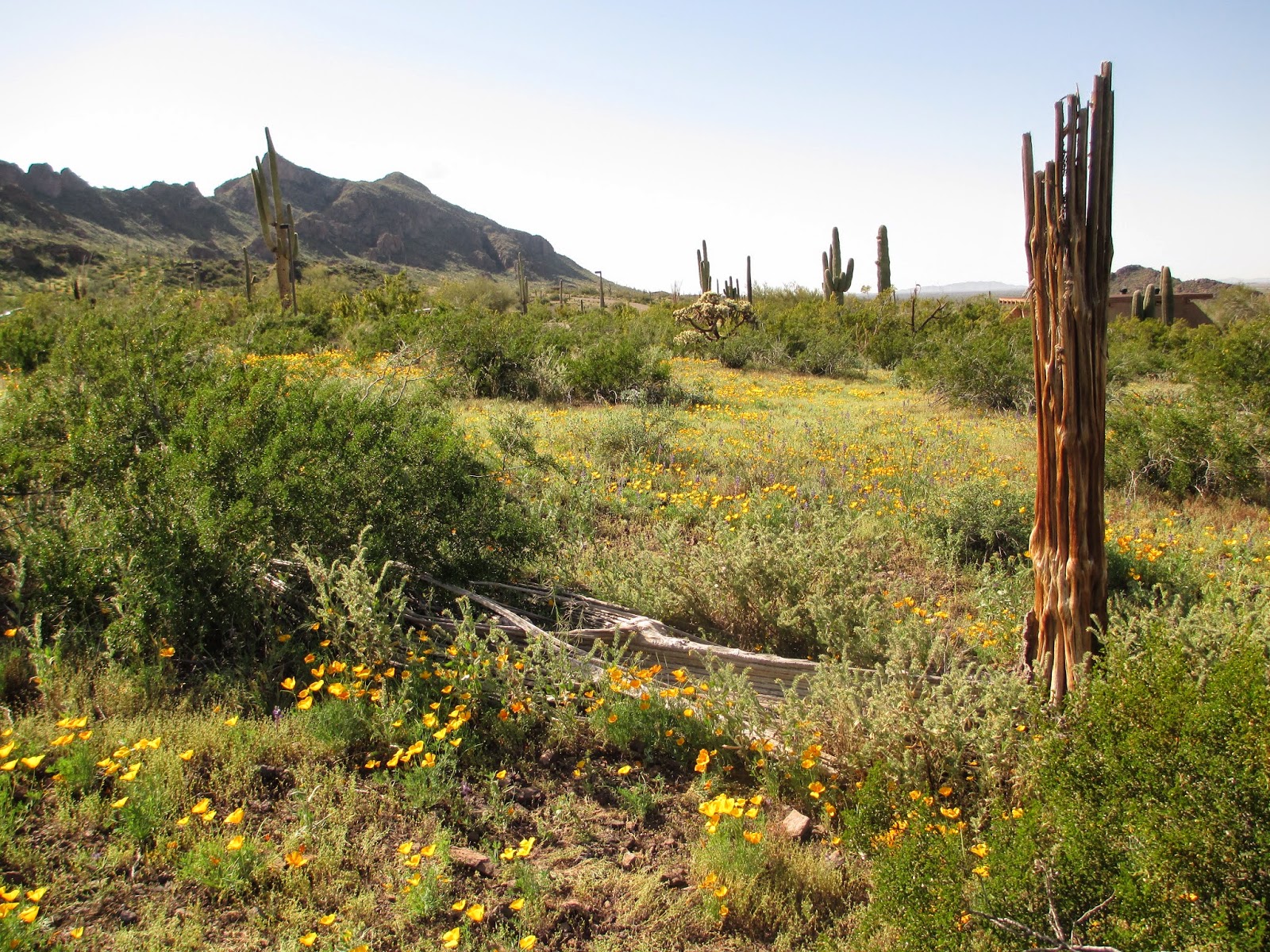 It was just a really pretty day to spend outdoors in a really pretty place. On the way home, we stopped by Happy Valley for dinner. I've developed a strange affection for Happy Valley; it makes me happy there. Maybe it's because the new developments have so many restaurants.