I collect a lot of used books centered around the Southwest. That's nothing unusual, so neither was Grandmother's Grandchild: My Crow Indian Life by Alma Hogan Snell (edited by Becky Matthews). This is the story of a Crow woman from Montana (she was born in 1923) who was raised by her grandmother in traditional ways but also grew up in the increasingly modern setting of a twentieth century reservation. And it's also probably the best of this type of book that I have read, which is the singular trait. 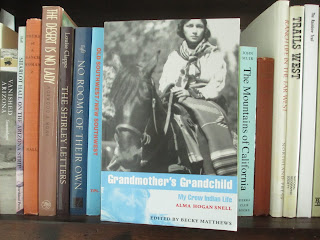 I like hearing people's stories. I'm a listener (this is why, though some people might call me quiet, I get along with talkative people: I genuinely like to hear what other people have to say). So while I don't read many biographies, I love autobiographies (if they're centered on a topic, setting, or person that I'm interested in). Alma's autobiography is the best of listening to a wise, elderly person speak of her life (this book was published in 2000, so she was 77 at the time). By the way, her aforementioned grandmother was Pretty Shield, who gave her story to Frank Linderman to publish, so you may be familiar with Pretty Shield's story (I wasn't, but I would definitely like to get that book in the future, as well).

The greater part of this book covers the time when Alma was young, say under twenty, although she does also describe the main events of her adult life. So you see quite a bit of the 20's, 30's, and 40's, that time when so much was changing. Because Alma was raised by her grandmother, she learned traditional ways of gathering food, preparing hides, and respecting the earth and all living things--more so than if she had been raised by her parents or if (like her older siblings) she hadn't been constantly by her grandmother's side. So you get quite a bit of cultural info that is interesting and the type of thing I had expected to find in this book. The narrative reminded me a bit of Little House on the Prairie in some of the earlier chapters: they're both stories full of descriptions of a fading culture, stories attempting to preserve awareness of the past and the people of the past.

Alma speaks always frankly in these pages. She says what she thought and what she thinks and why. She explains all sorts of things, as well, personal things that she could have glanced over but instead chose to delve into because including such details and incidents makes the story whole. As we get into her adult life, there is some dark content. Yet because she includes all of this, we believe what she says and we believe that it's true.

Alma also talks quite a bit about faith. She explains how the missionaries started churches on the reservations and her grandparents were the first to be baptized in that community. So while they still kept their culture, they moved away from other things that they had once held onto (Alma refers to her grandmother's "Crow powers," which she was at first reluctant to give up). Alma talks about how they already knew that there was a creator, so that was easy to accept. And she also explains their way of accepting the story of Jesus (they called him "The One Pierced in the Hand") as a warrior who gave himself for his children, explaining that everything about that story made sense to them and their concept of what was good. This was all fascinating to me; it reminded me of Emeth in The Chronicles of Narnia.

And then also you have people who were used to believing in what you could call the supernatural, if that's even the right word--and therefore their faith was strong and accomplished things. There are some great stories in there. Alma watches her grandmother stay outside of the storm cellar, lifting her arms to the sky and praying to God to let the storm pass over their house because her grandchildren need it--and then the violent storm completely passes over their house. Or Alma's own stories about praying for healing for people who were sick or injured. Or when she was about to have surgery to remove a tumor; that was a great story.

So you can look at this book as being about the intersection between two cultures. But whose life in this land in the past two hundred years hasn't included the intersection of at least two cultures? (I don't mean to say that Alma wasn't in a specific intersection or to lessen the cultural place that she was in. I'm just saying that these types of themes and concepts are what come together to make real people.) I just loved all of the things that this book offered: the cultural and historical descriptions, the discussions of faith and examples of its influence on life, and the depictions of different kinds of relationships between people. If you're interested in any of these things, then definitely read this book.

Posted by Deanna Skaggs at 2:41 PM