Have you heard of the night-blooming cereus? It is a stick plant. A long gray-brown stick with a hint of purple to it sticks up and grows more stick branches--kind of like a short tree. It looks bare and sculptural, except that there are tiny white dots with short spikes on them. They're the type of spikes that will give you more of a scrape if you brush against them, versus the type of damage you'll get from the usual cactus needles.

Not the typical type of beauty, I realize, yet I find this plant absolutely wonderful to look at. The shapes it makes. I don't normally like much modern art, but I strangely do like a lot of plants that remind me of modern art.

There does come, however, a time in which everyone will be able to see beauty in this plant. The name says it all. This pointy stick plant (which can grow to about six feet, but mine is maybe four to four and a half feet) grows magical flowers that each bloom for a single night. Like how each flower on a saguaro only lasts for a day. 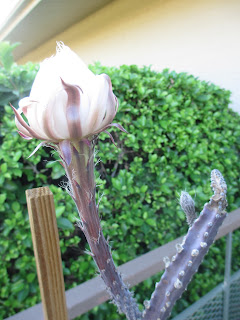 I've been watching for a while as little stubs started growing from my stick plant (I got it this March at the Desert Botanical Garden's Spring Plant Sale, by the way). The first one became a long stick of its own, longer than any of my fingers. While the rest of the plant grows in a sort of square shape, this part was rounded (you can see the contrast in the above picture). A blossom appeared. And then I walked by it on Thursday between 5:00 and 5:30 and a white blossom shocked me with its brilliance, its magical appearance. It floated like a cloud, soft above this spiky stick plant. 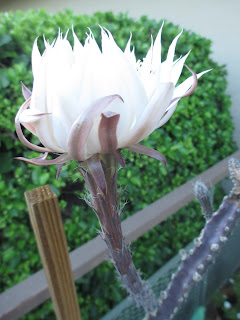 I was obsessed for the rest of the evening with checking back on the flower's progress. I took this second picture maybe around an hour later, when the petals were starting to open up. 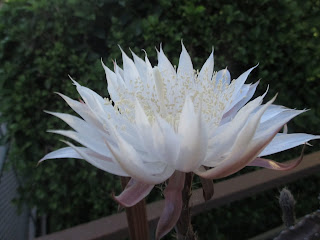 As the light faded, the flower emerged, like a nighttime fairy, like a secret for only those who knew to look (and when). 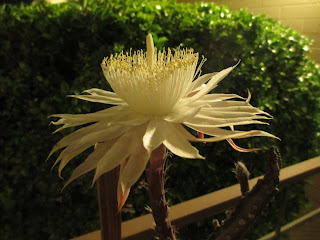 By the time night set in, the outer petals stood out flat and straight, while the center of the flower stood straight up. This isn't a particularly scented flower: if I went right up to it, I did get a powdery honey scent, but it was faint. However, the flower remains completely gorgeous. 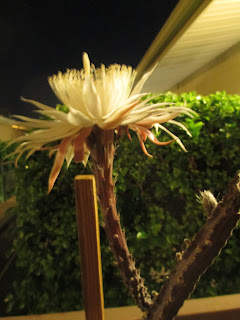 That night was quite windy, so I couldn't get a non-blurry picture that showed both the flower and a little of the plant. If I had set up my camera on the tripod and then held the plant still, that probably would have helped, but I didn't really think about doing that until afterward.

This flower is a moment to savor: by morning the petals were already closing up and by the end of the day it became a closed bud again, left to wilt and never again to bloom. This is the magic of the night-blooming cereus, the plant with the secret flowers of such beauty that they can only last for a single night.

Posted by Deanna Skaggs at 5:14 PM