Guardians of the Whills

Sometimes I wonder if I'm enjoying the Star Wars books that are written for younger audiences more than the adult books.

Such isn't really true: it's all on a case by case basis. But it is true that some of the adult books lean more toward details of politics and science and battles, such things as I am less interested in. And because the children's/YA books are intentionally kept simpler to be friendly for younger readers, that means that they sometimes get quicker to the heart of the matter. The characters and the drama, that is. And that's what I keep returning to Star Wars for. 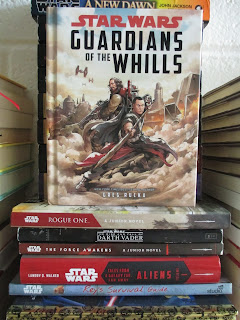 Rogue One set up a fantastic group of characters. I remember having little to no interest in any of them from that first group photo that they released. But when the movie came and I met them all and I saw what happened to them all, I felt like I knew who they were and I was both sad and glad for them. All of them. It was a great group.

Guardians of the Whills by Greg Rucka tells a story about Baze and Chirrut before the events of the movie. I think it's aimed at around the ten to twelve age group--or at least that's my guess. But that really don't matter. It's a little awkward to walk into the children's section of a bookstore, perhaps, but I don't consider this book limited to only one age group--this just means that it's accessible to younger readers. Greg Rucka also wrote a couple of the Journey to the Force Awakens books, which were similarly packaged for younger readers but also of interest to Star Wars readers in general (Guardians also has a few illustrations in the same grayscale-with-red style as those books had).

So this book is exactly what anyone who enjoyed Rogue One would want to read. It doesn't tell the story of how Baze and Chirrut met or started working together. In fact, it gives more backstory to Jedha than to them. And Saw Gerrera may have a hand in it all (which I didn't know until I started reading since I hadn't even read the book summary). At about 230 short pages, it's a quick read for adults. At the beginning of each chapter is a quote from a supposed collection of writings on the Force, which is a nice touch.

In fact, it feel like this book has more contemplations on the Force than any of the previous books I've read. Chirrut looks at the Force in a completely different way than Luke does, for instance. Because of this, Chirrut and Baze and Jedha are wonderful additions to the Stars Wars universe. This book may be short with a concise plot, yet it contains substance (and, you know, a second look at a couple of good characters). So it's as much worth picking up as any of the adult books--or perhaps more so.
Posted by Deanna Skaggs at 10:50 AM