The Threads of Thrawn

Tomorrow is Star Wars Day already, which makes me a bit mournful of the fact that Hyperspace Mountain (the Star Wars overlay of Space Mountain at Disneyland) is at long last coming to a close at the end of this month. I had hoped that I would be able to ride it at some point just to be part of this moment in Disneyland history, but now it looks like that won't be happening. Anyway, let's keep up the Star Wars spirit with another Star Wars post, a book this time.

I had heard of Thrawn and The Thrawn Trilogy, though the first time that I encountered the character firsthand was in Rebels, where he instantly lived up to his reputation. And then I got around to reading his trilogy (I'll get to The Hand of Thrawn eventually) recently. Now with the publication of a new canon novel, Thrawn by Timothy Zahn, the scattered threads come together. 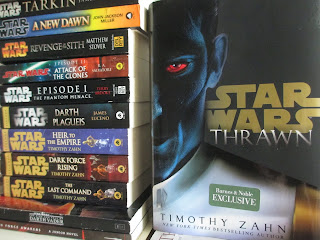 Though Thrawn's other books are non-canon now, the new book fits in with what they established about his character. And because of the Rebels tie-in, it makes sense for this book to take place between Episodes III and IV (and also because we have no confirmation that in the new canon Thrawn even survives into the timeline of the OT). That is, it takes place before Rebels, as well: this is the book that shows where Thrawn came from and how he started with the Empire.

So technically it's a villain book because it's all about the Empire's side. But it's nothing like reading Tarkin or Lords of the Sith or Catalyst. It's almost more like reading a Sherlock Holmes story (well, except that Thrawn is much more socially inept than Holmes). You don't have those questions of morality and good and evil and all that sort of angle. Not even motive, that much. It's mainly just a book about showing of Thrawn's ability to assess and analyze a situation and the people involved and to see the pattern and to achieve his mission based on those assessments. Yeah, he's working for the Empire, but strangely not in a sinister way. Thrawn is sinister in the way in which he can instantly see the heart of the matter, but he isn't exactly doing sinister things in this book. At least, not more than any character in a military, wartime situation.

Some of the story is also from the perspective of his aide, young Imperial Eli Vanto who really just joined the Empire with the generic purpose of just getting a good supply officer job. His perspective is there for the reader: he's getting to know Thrawn and trying to understand his technique just like we're trying to see what Thrawn sees. And we also see quite a bit of Arihnda Pryce, who has also been in Rebels. She starts off just as a person trying to make her way and her career, but by the end I almost feel like she is the one who becomes more sinister than Thrawn. So I suppose this book does offer an analysis on character motives and how a person's actions affect him/her.

You know, the way that this book finishes implies a sequel. I haven't heard anything about a sequel, but I definitely see that as a possibility. Or maybe Rebels is/will be the sequel.