After my recent experiences with Stone Grindz Chocolate, I was excited to hear that they were experimenting with truffles. As this is still an early stage, I'm also not considering today's review a review in the usual sense.

These truffles were nine dollars for a clear bag containing six truffles. That's $1.50 per truffle, which is about average or a little less than average; I would say the average price of a truffle is about $2 or $2.50, but these truffles are also a little smaller than average. 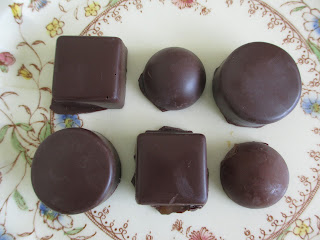 The style is simple and sleek. The round shapes (small half domes and short cylinders) are Dark Chocolate Ganache and the squares (these also came in rectangles) are Sea Salt Bourbon Caramel. Beautiful shapes and the chocolate looks healthy. There is some imperfection to the squares, with some chocolate spilling from the edges. Not much, just something to practice getting perfect.

I was admiring these truffles so much in the bag that I had perhaps forgotten they were more than just a visual item: I was pleasantly surprised at the wonderfully rich and elegant chocolate smell that came to greet me when I finally opened the bag. This shouldn't really be surprising, though: I had plenty of positive comments for Stone Grindz's plain chocolate bars. 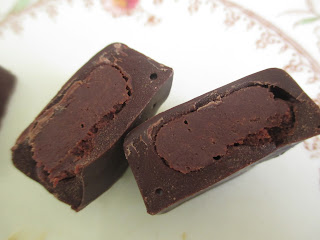 Starting in on one of the plain truffles, you can see that it is a little uneven. One edge is thicker than the other, and the bottom is perhaps thicker than it should be, as well. (I do often have this comment about truffles in general.) Still, these details mattered little or not at all as far as taste.

This is a rich, good chocolate with warm flavor. The ganache adds sweetness to it all and some creaminess; its flavors are still based on those of the chocolate. This isn't a really dark, deep, bitter chocolate experience; it's just dark in the approachable sense, something nice and rich. Likewise, I can't exactly call it sweet yet neither is it unsweet. This is a solid ganache truffle; I would buy it again.

Now on to the next one. The caramel is free-flowing, which I normally wouldn't try to cut open to photograph because that usually just makes a mess. But I did abuse this truffle just to get a picture of the color and consistency of the caramel. As you can see, it has a sort of dark orange tone and it is definitely free-flowing. 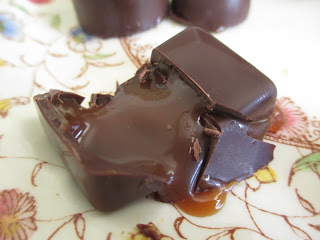 I always seem to hesitate around caramel in this type of setting. I like caramel; I just think of it as working more in a confectionery sense, with desserts and ice cream and such. I always think that it won't be good enough for a truffle setting. But I tasted a touch of this caramel that had spilled out, and it was wonderful. It captured me right away.

I should here note that I had forgotten the exact flavor of the caramel while I was tasting it; it wasn't until later that I went back and saw that it was sea salt bourbon caramel.

So here is what I found in the flavor without realizing all that. I found just the right amount of light sweetness and a honey taste, completely with its own richness, just a bit of vanilla, and some of the expected "caramel" flavor. And also the right bit of stickiness to the texture. Biting in, I tasted chocolate and cream and vanilla. The chocolate felt darker and plainer than in the ganache, which made a good match for the caramel here. I wasn't finding the regular caramel flavor here; instead, I found an amazing flavor experience that I only wanted more of.

It's the bourbon, of course, that gives the richness I detected. It really does elevate the flavors in just the right way to make this truffle fresh and exciting. While I certainly enjoyed both truffles, I did find myself liking the Caramel one more simply because it was unique. I've had good plain truffles before (though I don't want to make light of that fact because I do appreciate finding more) but I don't recall ever having a caramel that was quite like this.

So this was an experiment? Well, then, congratulations is what I have to say. These are already better than some of the truffles I've bought in established stores. Stone Grindz is starting with a good chocolate to begin with, so that already helps a great deal and sets them ahead. That's why the plain ganache turned out well. And then the caramel was a great way of offering me something a little familiar yet so much better than what I might have imagined. Dark Chocolate Ganache and Caramel were also two good flavors to start with: they're popular flavors, with one sounding a little richer and one sounding more casual but with both offering a great flavor experience.
Posted by Deanna Skaggs at 12:14 PM