While I may not entirely understand why there are Star Wars books put together specifically for the YA/teen genre (when I was a teenager, I was reading adult/non-age-specific books because I found the teen books boring), I did enjoy both Claudia Gray's Lost Stars and E.K. Johnston's Ahsoka. So Beth Revis's Rebel Rising seemed promising--except that I don't overly love Jyn's character and therefore it follows that I wouldn't overly love a book based on her. With Guardians of the Whills, I was excited about seeing more of Chirrut and Baze--but I didn't exactly feel like I needed to see more of Jyn. 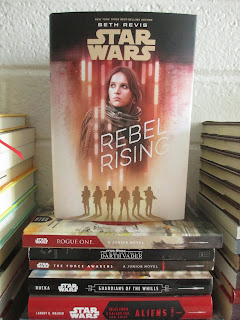 Don't get me wrong, she's a good character and she fits into Rogue One. But she's a sad character, a tragic character. She's broken, and while the end of the film does allow us to see her finding peace (though not in a "happy ending"), there is much of sorrow and despair in Jyn. She's a bit like Eowyn, in fact, I've just realized (perhaps I'll do a post on that later). So to come in to Rebel Rising knowing that Jyn's breaking begins at the beginning of this book and she will still be broken when this book ends is difficult. It's a depressing book, and there isn't much light in it.

Rogue One was all about showing the gritty realism, the very real tragedy of wartime. "Good" characters doing bad things for "the cause." People being eaten up from the inside because of what they're doing and what they're seeing and what they're still not able to accomplish. Rebel Rising is along the same vein, just in more detail. We see Jyn as a child, first her time with Saw and then what happened to her after he left her. Plenty of questions about war, rebellion, politics, and all of that. Jyn sees the negative effects on individuals that the rebels have--and that's why she can't believe in their hope. It makes a good setting for her character in the film. It's strange: I feel like I always knew the details of this backstory just because they fit in so well with what was already established (because, of course, I'm sure the story group or someone did come up with Jyn's backstory well before this novel).

I am going to give one criticism. The Hadder bit felt off. It felt like someone said, oh, this is YA, so you have to put a love story in there. It felt randomly inserted in the story, like I didn't quite believe that it was part of Jyn's real history. Part of that is the point, yes: it's a random time of happiness that serves as an example of all that Jyn loses because of the war between the Empire and the Rebellion. This taste of happiness is why Jyn can't believe in the rebels' hope. And it also sets the scene for another between-the-lines hint that Jyn and Cassian could've been more than just friends.

Which brings me to the way this book ends, moving right up to the scenes from the movie. I wasn't expecting this, and yet it did fit well. This was the only way to provide a semblance of peace for Jyn's character to resolve the book, instead of just leaving her still completely broken. And it makes you think forward to later in the movie when Cassian tells her, "Welcome home." All the pieces tie in, and tragedy gets hope.

So, yes, I liked this book less because I'm less interested in Jyn. But it did provide the backstory, particularly of her time with Saw and of how the Imperials caught her, that we maybe wanted after seeing the movie. Now I hope we get another book focusing on Cassian. I know there's going to be a Cassian/K-2 comic, but I haven't delved into the realm of comics yet.
Posted by Deanna Skaggs at 12:33 PM