During my first encounter with Tony's Chocolonely last month, I declared their dark chocolate similar in taste to Ghirardelli. I deemed this a favorable view. Now, I had planned to review their milk chocolate next, This time, however, World Market was out of the plain milk chocolate, so I chose the Milk Chocolate Caramel Sea Salt bar instead. Perhaps this was just as well: I may be enjoying the flavored chocolate more than I would have the plain and in this way I can comment on both the flavor and the chocolate in one go. 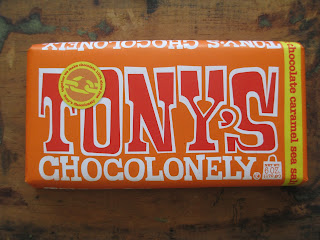 The same style of wrapper this time is orange instead of blue. And the same bar design looks different in the much lighter 32% milk chocolate than it did in the dark chocolate. This bar smells nice and sweet and milky and caramely, like a confection shop. 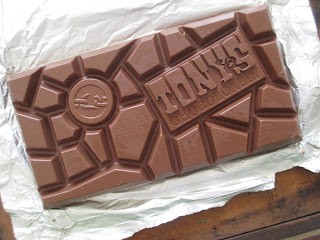 Breaking off pieces of the chocolate, I saw right way that the caramel is neither free-flowing nor stiff and sticky; instead, it is in little pieces like peanut bits. Given that this same type of thing just happened to me with Alter Eco a couple weeks ago, it would seem that the world has turned upside down on me and what I thought caramel meant is no longer so. This type of effect reminds me more of light toffee, but I suppose the distinction doesn't much matter. 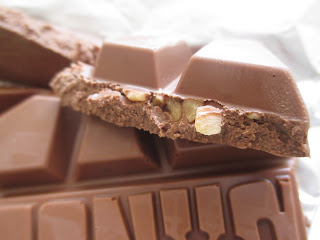 As I've implied, the tiny caramel pieces are crunchy. The salt accompanies them, so where there is more caramel, there is also more salt. Some bites have more caramel and some have less. Those that have more are almost too salty, but given that these are only some of the bites out of the whole bar that reach this level of saltiness, I'd say that overall the salt level is fine.

Because this is quick-melting milk chocolate and the caramel is crunchy, you do tend to taste the sweetness of the chocolate first and foremost and then begin crunching on and tasting the caramel (with its salt) more around the halfway point of each bite. The chocolate is a pretty standard milk chocolate; it's better than the average candy bar milk chocolate, certainly, but still what I would consider more in the confection range as far as taste goes. It's sweet and creamy and doesn't try to have extra depth. It's a straightforward milk chocolate, and take that as you will.

My theme of late has been my craving for milk chocolate, so this big six ounce bar will certainly be welcome for those moments when sweet chocolate is simply all I want. While in general I tend to give more favorable comments to the darker and perhaps more luxurious milk chocolates, I do think that this bar serves a good purpose. For those who don't want a darker milk chocolate or for those moments when we all want something that's more candy-like, here is fair trade chocolate that will satisfy. I used to like to buy Rocky Mountain's plain milk chocolate bars every so often, and last time I passed by one of their stores, I looked in mournfully because I'm trying (in general) not to buy chocolate that isn't fair trade. So here is a chocolate that delivers that same sweetness and that same milky confection flavor while also reaching a more acceptable standard.

After all my initial comments last time about disliking the Tony's packaging (I still don't really like it, but I'm used to it now), I now find that I wouldn't mind seeing their chocolate for sale in more places. This chocolate serves a purpose.
Posted by Deanna Skaggs at 3:42 PM