This is that one week of the year where I would normally be saying, "Wow, it is going to be hot--it's going to be 110. It'll be 120 down in Phoenix." (The regular high over there for summer is more around 104, and Phoenix more around 114.) And now I'm in said Phoenix area, and it is weird to have the temperatures but none (or certainly less) of the views of the pretty land that creates such high temperatures. So I'm trying to settle into a different view of summer.

Summer means food, in many ways. Lots of fruit and summery beverages. Tortilla chips and brownies. Casual food. So even though milk chocolate is perhaps more susceptible to heat than dark chocolate, milk chocolate feels more like summer to me in general. So let's launch the summer season with the Hazelnut Chunk bar from TCHO. 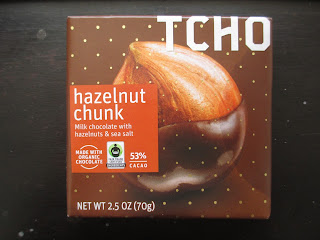 If it's casual chocolate you want, you'll get exactly that right here. Although this is labeled as having 53% cocoa content, the color looks much lighter, more like 42% at the darkest. I would guess that this is because they added hazelnut butter (whatever that is) to the chocolate, so the 53% content is lightened in that way. There are also small chopped hazelnuts in there, along with just a touch of sea salt to bring out their flavor. The nuts are pretty visible on the back of the bar, but not at all on the front. 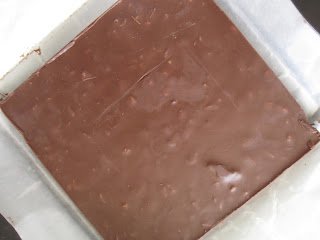 I'm going to repeat what I always say: I love chocolate and hazelnuts together, but I don't like most chocolate hazelnut spreads (especially Nutella) because they're just made of oil and that comes across in the flavor. So coming from the idea of hazelnut spreads, it makes sense to combine the hazelnut with the chocolate into one smooth element--but then this bar also has those crunchy hazelnuts. At first I found them disruptive and unnecessary. Maybe they're there to give the feeling of "real" ingredients--but that should be evident in the flavor, anyway. 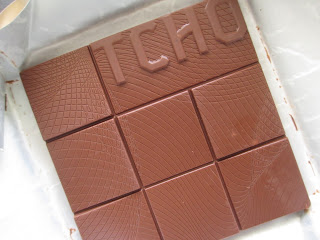 I think, though, I have settled on the reason for their inclusion. While the hazelnut-infused chocolate makes me think of hazelnut spread and hazelnut truffles, the addition of chopped hazelnuts intentionally distinguishes this chocolate and sets it in its own space. After all, if people eat hazelnut spread out of the jar with a spoon, then why do they need to buy a chocolate bar that replicates that same experience?

And it isn't as if they're large hazelnut pieces. They add only a small crunch. Similarly, the sea salt appears in only some bites, as a light accent to the crunch. Nothing extraordinarily innovative or in your face. Just a couple of elements to add interest to the smooth, vanilla-flavored, hazelnut chocolate.

It is, let me add, most decidedly a milk chocolate, just like the label says, despite the supposed 53% cocoa content. Maybe a little more flavorful and rich and less sweet than some (probably mainly because they added a lot of vanilla), but not at all like a dark milk chocolate.

It's a nice bar of chocolate, a potential replacement for candy bars, cheap chocolate hazelnut spreads, and certain cookies. A simple flavored chocolate that is organic and fair trade. And it's also one of those bars that's difficult to stop eating: I've pretty much eaten the whole bar in two sittings and I never do that.
Posted by Deanna Skaggs at 2:00 PM