I believe that every literature student develops a literary crush on the words of John Keats. I don't know of anyone would could put words together in such a lush, mellifluous way or who combined beauty and tragedy so closely. 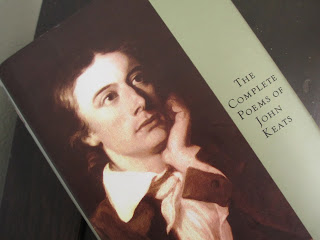 There is a quote in Not Another Happy Ending (with Karen Gillan, Stanley Weber, and Henry Ian Cusick) that addresses this special effect that Keats has. In the film, Jane is stuck in writer's block and her publisher decides that, after the success of her first book, she's too happy and therefore he needs to find a way to make her unhappy so that she can write again. Here is the quote:

"The trick is not simply to upset her; you have to get her in the right mood. It's a special kind of misery you want, a melancholy, a dull sense of dissociation and alienation that's the source of every artist's creativity. It's like drain unblocker for novelists." (Not Another Happy Ending 2013)

And then they mention Keats, as one possible way to help get her in this mood of melancholy. He did write "Ode on Melancholy," after all. And "When I have fears that I should cease to be," which is all about contemplating his upcoming demise (he died, as you probably know, at only 25). Then we mustn't forget "Lines supposed to have been written to Fanny Brawne," in which he paints a picture of his living hand that he reaches out to his lover being instead a dead hand in a tomb--that one's fantastic.

Sometimes I do have to read Keats when I'm already in a sadder type of mood--and other times I know that I should not read him because that'll tip me over the edge into too negative of a mood. Often I just have to sit and read "Bright Star" over and over again because it's become a kind of muse for me. "Ode to a Nightingale" is a kind of reminder of what fiction is and can do: it exists in that space between reality and imagination, accompanied with flawlessly beautiful language.

I have been reading The Complete Poems of John Keats for quite a while now. The going is slow because I rarely read more than a few pages at a time: there is so much to absorb. And often I get distracted and turn away from the marked page to go back and read some of my favorites again. They say, in general, that it's best to read poetry aloud--but with Keats, it's like there is a unseen force that simply compels you to read at least some lines out loud. Your mouth just wants to form these clusters of words because they look so ripe. And then that makes all of the tragic beauty settle in more--and you're right in that specific mood that straddles the line between melancholy and exultation. The mood of poetry.
Posted by Deanna Skaggs at 1:06 PM