This is a recurring theme of late: I find myself explaining, once again, that I have been avoiding a certain brand of chocolate without remembering why. My eye just passes over Equal Exchange with a vague impression that their chocolate isn't interesting enough to look at. That could be true. What did surprise me, however, was learning, after doing a search of my chocolate review archives both on this blog and on Chocablog, that I have never written a review of Equal Exchange chocolate.

That is strange. I felt certain I had tried their chocolate at some point--but under what circumstances would I have done so in the last nine years without writing up a review? 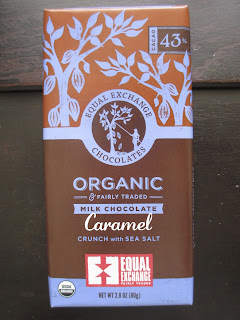 I am somewhat familiar with Equal Exchange in other contexts, though. I buy their tea sometimes. Normally I prefer to get loose tea, but since that isn't always an option, my favorite bagged tea (for the morning) is their Black Tea (which I do find I prefer to their Breakfast and Earl Grey blends). And lately I've been buying their cocoa powder, not because it's the best I've ever had but because it's the most readily available acceptable quality (and fair trade) cocoa powder I can find right now (Hershey's and Nestle cocoa powder will ruin a good recipe and simply aren't worth buying).

So among the many products that Equal Exchange sells is their chocolate. Milk and dark, plain and flavored. Today I have their Caramel Milk Chocolate, which seems to come with the full description "Caramel Crunch with Sea Salt." So I am also taking part in another recurring theme today: that of crunchy caramel, which I have come across lately from Tony's Chocolonely, TCHO, and Alter Eco (well, TCHO's was more aptly labeled as toffee, but it was the same type of product). 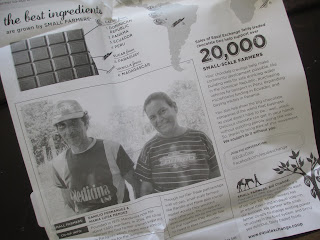 I haven't much to say about Equal Exchange's packaging. It's neither amazing nor terrible, but it is recognizable. Similarly, the chocolate bar comes molded in a standard, plain shape with 18 little rectangles. Instead of being wrapped in foil, it comes in that sort of white film, the name of which I am not certain. The paper wrapper unfolds in the usual way to show some info about the company, explaining that Equal Exchange is a worker-owned co-op and that their cocoa comes from farms in the Dominican Republic, Panama, Ecuador, and Peru. It's more about fair trade than about the chocolate specifically. 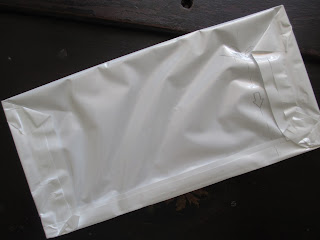 Now, as you can see, that chocolate has a 43% cocoa content, but does look paler than that to me. (That's another thing I keep saying lately, isn't it?) The back of the bar is smooth, but on the front you can see some of the caramel pieces showing through the pale chocolate. It smells of cocoa butter and caramel. 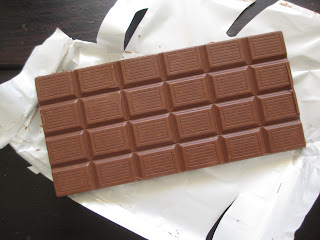 And yes, the caramel is the same type of crunchy, toffee-like material I've been coming across lately. This is one of the less salty salted caramels I've come across recently, which I do find I prefer for the milk chocolate context. The bar from Tony's, for instance, had quite a bit of salt in comparison--which made it harder to eat too much of it at a time. This lower amount of salt works better, I find. There is nothing much to say about the caramel; it has more crunch than flavor. 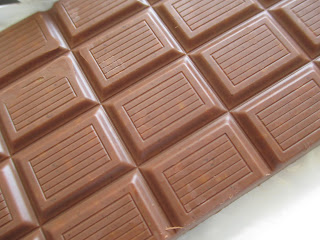 Mostly you just taste the chocolate. Having tasted the plain versions of both Equal Exchange's milk and dark chocolates lately, I can say that I probably prefer their milk chocolate to their dark chocolate. Both have what I think of as a Nesquik flavor--it's difficult to describe it in any other way. The milk chocolate does, I suppose, have a nutty flavor to it. And it is more milky than sweet. There isn't much of a cocoa flavor, just a pale chocolate taste. (It's possible that what I'm tasting is the powdered milk.)

It's a nice enough bar of chocolate. It follows the same type of caramel effect I've been running into lately. The chocolate is casual, still in the confection/candy bar replacement zone. It isn't the best fair trade chocolate on the market, but it also isn't the worst. It's . . . average--and perhaps that's why I kept passing by this brand. It might be nice to have one brand that you can support across different types of products and this chocolate is fine for the occasional sweet, but I would need a little more attention to detail before I could give any higher praise.
Posted by Deanna Skaggs at 3:31 PM