Do I Read a Variety?

I still don't feel like I read that much of a variety, but take a look at my shelves. When I compare them to other people's shelves, I do tend to see more of a variety--in general. Or at least not, I think, any less of a variety. 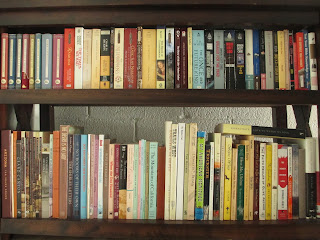 The top shelf, as you see is eclectic: it is made of the books that are small enough to fit in it. Mostly classics, though, along with Orson Scott Card and Laura Wiess. The second shelf is mainly my Southwestern shelf, though it also has some books focused on other areas of America. Both fiction and non-fiction (mainly non-fiction, I think), with plenty of personal accounts, fiction inspired by life, and a bit of poetry. I've been rater doting on this shelf of late. 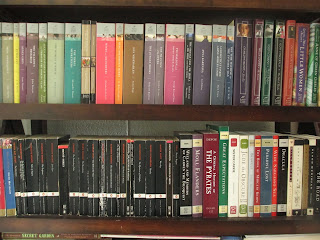 Two shelves of classics come next, first the Barnes & Noble editions and then the Penguin, Norton Critical, and Vintage editions. Most of the second shelf I gained from college, but the first shelf are books I've collected and read on my own. 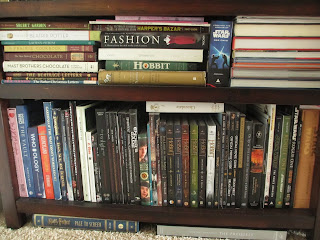 The bottom two shelves, because of their size, belong to the big books. These are mainly movie books, as I do love a good movie book (I like when they talk about the making of a movie, not just its plot). But there are also some other random types in here: a couple of annotated books, some books on chocolate, some books on Disneyland, some books on Victorian fashion, etc. 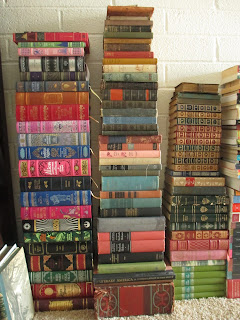 Now we move on from the shelves to the stacks. One stack of Barnes & Noble leather bounds, which I love and prize. Two stacks of vintage books, some of which I have only for looks, so these are the two stacks that you can't completely include when considering what books I read. 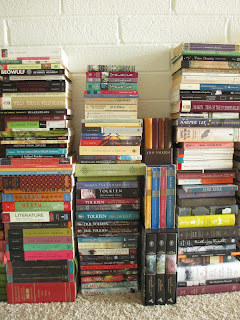 Three more stacks of mainly classics. That is, the left stack has plenty of anthologies from college, along with some of the older texts, like Greek plays and Beowulf. The middle stack was supposed to be Tolkien and Lewis, but it was too short, so I had to add some general fiction in there, as well, at the bottom: more Laura Wiess, the Primeval books, and a couple of others. The stack on the right is my Bronte stack. Mostly Charlotte, along with plenty of non-fiction that I referenced for my honors thesis. Again, this stack was a little short, so I added some classic fiction written by other women on top (along with Hardy's Tess of the D'Urbervilles). 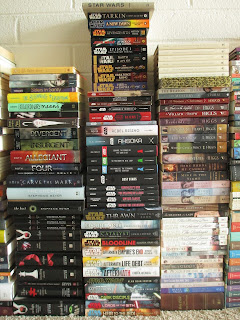 Now we move into modern times. The left is mainly YA: Stephenie Meyer (along with her adult novels), Veronica Roth, and some others. Then the great Star Wars stack, which outgrew its space and started spilling over to the stack next to it, where I keep the Christian fiction. These are pretty much just historical fiction. 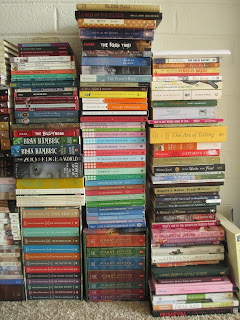 That leads in to two stacks of children's books. A Series of Unfortunate Events, American Girl books, Dear America books, Little House on the Prairie, and then some more general fiction that didn't fit in elsewhere. The final stack is the most random. I started it mainly as the non-fiction stack, with reference books and autobiographies and biographies and other things. But then I still had to add in a few classics on top, these the ones written by men.

They don't look like very many books in seven pictures, perhaps, but they take up a whole wall of space. I have not read them all, no, but I have read most of them. There are only about a hundred that I haven't read, which is only about a fifth or a sixth of the whole. (I realize that a hundred books is a great many to own and not have read, especially since I keep buying more--but part of the joy of owning books is being able to choose, at any given time, which one I would like to read next.)

I don't try to read a variety. I only to read things that interest me, for one reason or another. And because life brings about so many things to be interested in, I keep bringing in more types of books. I don't need a marketing campaign to tell me what to read next: I choose on my own, and I always have so many more things to read that it doesn't matter who designed a book cover or who gave a book a good review. I want to read a book because I feel a connection towards it.

These books are the connections I have made.

Posted by Deanna Skaggs at 1:22 PM