Because of my love of Emma Shapplin's music, I had hoped for a long time to someday have her 1999 EP Discovering Yourself. But most often, the sellers on Amazon have had it for sale around $35 or $45 dollars. For four songs (one of which is a remix), that is quite a bit. Wonderful thing, however, I saw it for $10 last week; so here it is finally in my hands: 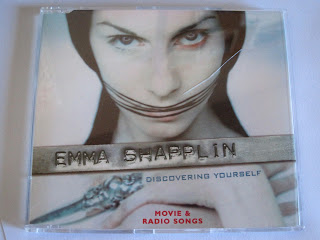 The tracks are: "Discovering Yourself," "Cuerpo Sin Alma (remix)," "Fera Ventura," and "Dolce Veneno." The first track has a music video which is on YouTube. It's an odd sort of combination of pop/rock/classical--very Emma Shapplin, then. It's also the first song (years ago) I heard her singing in English in; it's funny to realize that I couldn't understand many of the lyrics back then. But I've grown quite fond of this song for the themes that the title alone expresses: growing into yourself and deciding who you are and all that comes along with such a journey.

I believe both of the remaining tracks are soundtrack songs, at least one from Red Planet. I could be wrong on the details. "Fera Ventura" does have something of a sci-fi sound to its classical overtones. It's an interesting song, with a chorus in English that may take a moment to distinguish as English. "Dolce Veneno" is more a straight classical song, though of course accompanied by Emma's stretching, emotional vocals. It's comparable to many of the songs on Carmine Meo.

My music library just got happier.
Posted by Deanna Skaggs at 1:27 PM