Most people recognize Pauline Baynes for illustrating The Chronicles of Narnia, but what less people know is that she also illustrated for Tolkien. In fact, I've also heard that she was his preferred illustrator. So while the little hardcover copy of Bilbo's Last Song is a slim volume, it is worth having just because it includes Pauline Baynes illustrations. Alan Lee and Ted Nasmith have done great work for Tolkien's writings, too, but there's something delightful about Pauline Baynes's style--probably not least of which is the similarity to her Narnia work. 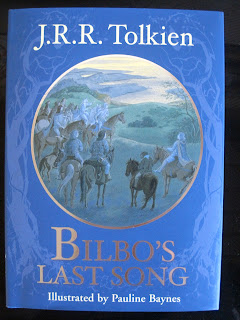 At $12 for a poem you can read in the blink of an eye, this is probably a volume most people will pass over. But I happily got it as a sort of gift. The text is, of course, Bilbo reminiscing as he departs at the Grey Havens. So the illustrations portray both his departure and flashbacks to his time during The Hobbit. My favorites include: the trees that surround the text, the clothing the elves wear as they ride to the Havens, frog-like Gollum sitting in his boat, and the Lonely Mountain. It's a delightful collection.

I'm loving how many more books like these are in stores lately because of the movies coming back.