Pumpkins, pumpkins, how did the lucky things win out? They're the decoration that gets to be around the longest, except perhaps for Christmas decorations. Pumpkins can simply stand for Fall, or for Halloween and Thanksgiving. So while the skeletons make way for the turkeys when October transitions to November, the pumpkins get to stay. 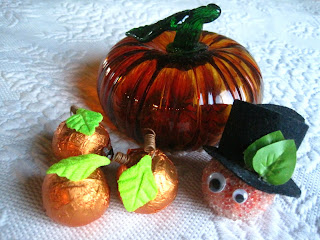 Godiva is right, then, to offer a pumpkin truffle. But do note that the orange foil paper, felt leaves, and wire stems lift the price above the five-truffle standard to $15. That's three dollars apiece, which is all the way on the upper end. So you must want them not only for eating, but also for decorating, otherwise the price is iffy. 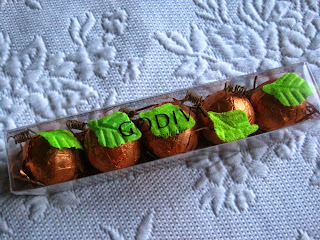 But, you know, I don't know if I mind that little compromise: they are nice flourishes of Fall color. In the plastic box, they're a bit prim; but outside, they're festive and even handmade. I'm not used to Godiva's offerings looking handmade, so this is a bonus. 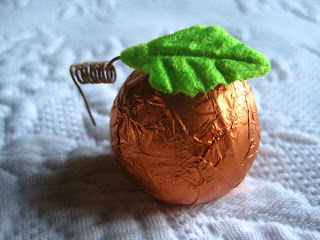 Each pumpkin is a standard milk chocolate truffle with a pumpkin spice center instead of the usual inside. The seasonal outside doesn't reflect at all on the little truffle--unless, of course, you use the foil as a serving plate the way I did. 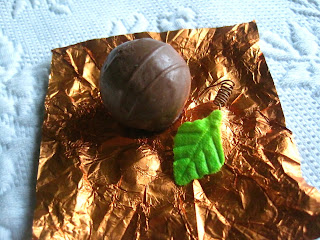 Since this is standard Godiva milk chocolate, let's move on to the filling. It doesn't taste quite like the "good pumpkin pie" that everyone makes from the can labels. It tastes closer to the filling on grocery store pumpkin pies; this means that it is less pumpkin-tasting and more general oil-tasting. And by oil, I really don't mean the worst: I don't mean oil like in cheap pizza, but oil as in that wetter texture of lower quality pumpkin or pecan pies. It isn't exactly terrible, but because of this whole tangent it brings up, neither is it entirely pleasant. The fact is, it just isn't the best. 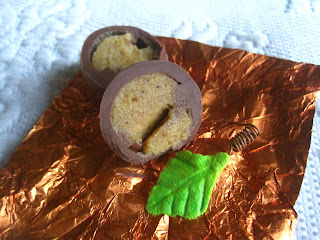 The truffles taste like pumpkin and like the standard pumpkin pie spices. They also taste like milk chocolate; and for this being milk chocolate, the truffles aren't overpoweringly sweet. In a casual way, it all works. But, no surprise there, I wouldn't say it's up to par. I want a recipe more delicate and a filling more refined. I'll eat the truffles and share them, but I prefer to think of them as little chocolate pumpkins for decorating.