The first time I stepped into Julia Baker Confections, I came out with cake truffles only. So when I was near the shop again, I went for a slightly different angle. While my general reaction was about as positive as it was last time (you can read about that here), I do have one complain to get out of the way first. You see, I just figured out what a cafe mocha is: it's coffee with chocolate in it. I had a good version at Wildflower and a pretty good version in Downtown Disney. So I thought I would try Julia Baker's version. If chocolate is her specialty, that must mean this drink'll be great, right? Not really. The coffee part was good, fresh and rich, but the chocolate element was hidden under the coffee. As a coffee drink, it was fine--but I wanted a chocolate coffee drink. 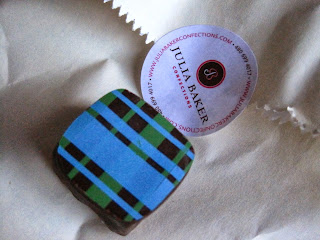 I also picked out two chocolates. Since I had the dark version of the Cake Truffle before, this time I chose the milk version and the Irish Creme ganache, which is the blue and green plaid square. But let's start with the cake truffle. Besides the milk chocolate outside, it has red velvet cake on the inside. This cake is flavorful, with that recognizable sweet yet tart berry taste. Like in the other truffle, the cake is fairly dense as compared with boxed cakes but not on the level of a flourless chocolate cake. While I would have expected to have a cream element added in the form of a white ganache or even a little white chocolate, the milk chocolate is capable of picking up the balance. The milk chocolate also, I might add, has its own tart flavor notes in addition to its sweetness; in other words, it's good quality. This is definitely a creamer, sweeter version of the dark chocolate cake truffles. The use of red velvet adds uniqueness and depth to it. I would probably still pick the dark version over the milk one, but both are nice; it's just going to be personal preference that chooses one over the other. 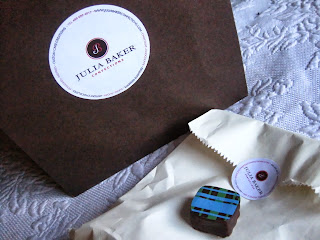 As for the plaid Irish Creme, the little square almost looks small compared to the fat cake truffle, although the creme is average in size. The Irish element, as you can guess, comes from Bailey's, and the alcohol element comes in right away. While it's definitely there, it isn't overpowering. And although it's the ganache that contains the Bailey's, the ganache is also the sweetest element. The average-darkness dark chocolate, therefore, sets up a dessert-like sweet/rich duality when paired with the sweet ganache. It's sophisticated, but not snobby or inaccessible--by which I mean that it isn't bitter. There is also a hint of caramel to the flavor. Being so smooth, I almost want to say that the ganache is too smooth, although it doesn't quite cross the line. The chocolate, however, is the right thickness to hold the ganache without being too thick. Put together, it's all nice.

So I'm still happy, in a general sort of way. For posh confections, I'll probably go to Julia Baker Confections again. But I won't go for a deep cocoa experience . . . or for a cafe mocha.
Posted by Deanna Skaggs at 11:07 AM