I've just been reading such notable literature of late. First it was William Shakespeare's Star Wars; now it's The Quotable Walt Disney. That's the great thing about being done with school: I can catch up on reading random things that I am interested in. This little paperback came from World of Disney last month. While biographies and hardcover coffee table books are pricey, this one was only about twelve dollars, which I consider a good value. 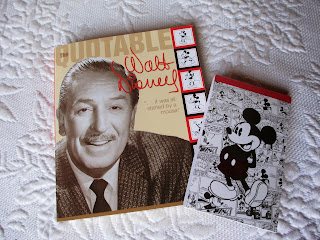 The book is slim at around 260 pages; each page has either one long quote or two to three shorter quotes. For easier browsing, the quotes are separated out into sections--on films, the parks, family,  America, television, and so on. A picture of Walt in different settings or with different people opens up each section. So the format itself is accessible, organized, and attractive. Dave Smith (who is also director of the Walt Disney Archives) did a good job at all of that. 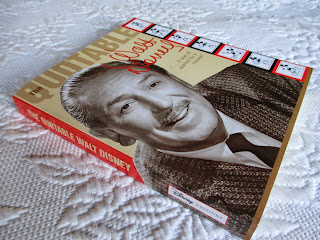 But it's the words themselves that make this book such a joy. It wasn't by chance that Walt Disney became so famous and accomplished so much: he had a good philosophy and he stuck to it. He had the right values of teamwork, dedication, ambition, steadfastness, and gratitude that just make the world better. He understood the impact what he did would have. And that's how it is with any individual: all actions have their results. Creatively, this book is inspiring. But it is also inspiring scientifically and personally and whatever else. It makes me think back to what I love about Disneyland or my favorite Disney films. Because it's just a book of quotes, it also has no fluff. Walt's wisdom is all it has and all it needs. Thank you, Mr. Disney.