Last week, I investigated the more middle-range Dead Sea Salt Chocolate bar; today I bring the Halloween telescope back down to the candy level. I managed to find three candies with a specific Halloween twist--not including a bag of, I believe, Hershey's kisses, that I decided not to get (at least for now). In green, purple, red, and orange, the candies don't really give off a traditional Halloween vibe. Just squint and you won't even be able to tell that's the holiday they're celebrating. 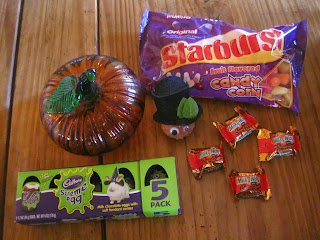 Let's begin with the Starburst Candy Corn. I don't favor candy corn much. I just like to have a couple pieces a year, and I have already taken those from a store's candy bowl. So I was more interested in the bags of flavored candy corn this year. Starburst seemed a less traditional enough combination that I might like it. There are four flavors/colors: strawberry, orange, lemon, and cherry. While the candies are slightly moister and softer than regular candy corns, they do taste much like Starbursts. Because the "material" of Starbursts has been too much for me these days, I enjoyed having their flavor in a different format. For a fruity twist on the classic candy corn, I think these work. 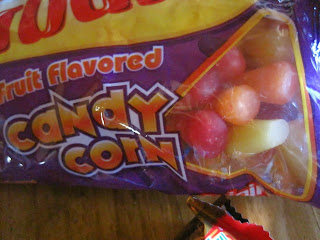 Now on to the chocolate candies. As candy bars go, I like Milky Ways. Here we have minis in Caramel Apple flavor. The cashier assured me that I wouldn't want to give them out to trick-or-treaters (I wasn't planning to, anyway) because they taste so good. And you know what? I see what she meant. This is still a candy, with the same chocolate, the same nougat, and the same caramel we're used to. But the added flavoring gives it a more sophisticated feel. Instead, however, of calling if Caramel Apple, I'm tempted to call if Spiced Apple. All of the warm, holiday spices really take over the other flavors so that I don't necessarily think of caramel while I'm eating. But I suppose Caramel Apple sounds more Halloween than Spiced Apple; Spiced Apple could be a nice Thanksgiving offering. This makes one more candy I'm essentially pleased with. 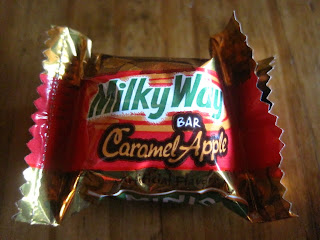 While Cadbury Cream Eggs are an essential part of Easter for many people, I don't get them very often. I also figured out this year that I prefer the chocolate variety: the chocolate cream is less sweetly sticky than the regular kind. I've never had Scream Eggs before, and I'm uncertain whether or not I find the concept on the cute or gross side. That green color isn't exactly the most appetizing. 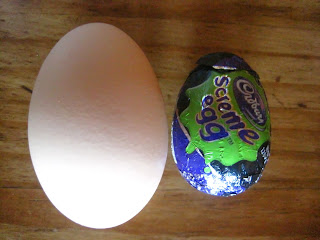 I have managed, just for you, to take a picture of this egg's inside without making a complete mess. While it is, naturally, not nearly so perfect as the picture on the box, the swirl of green is intriguing. The box also assures everyone that, while the creme is green, it has the same taste as always. And that's really all I need to say. If you've had a creme egg, you know how sticky and gooey and sweet they are without tasting like anything but creamy sugar and very sweet chocolate. Honestly, I'm still not won over . . . but I like that there is some sort of twist, anyway. It would be better, though, if Cadbury also added a flavor in addition to the green. 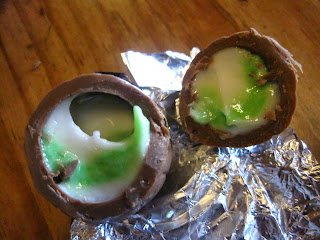 Considering that these are among the best Halloween specific candy offerings available at the average store, the selection really isn't great. But considering what else is on hand (bags of regular KitKats and Smarties), I'm glad that at least Candy Corn, Starburst, Mars, and Cadbury have done something different.

Posted by Deanna Skaggs at 4:27 PM