Click here for my review of the first box, from Steakhouse 55.

"Ye come seekin' chocolate and sweet little truffles, eh? Well, ye've come to the proper place. Now sit back and hold on tight, with both hands if ye please."

Wait, what? Oh, nothing, just a little playing with a Pirates of the Caribbean quote in celebration of the Blue Bayou and its box of the Diamond Celebration truffles. I do love the Blue Bayou, don't you? I've only eaten there twice, but just the idea of dining inside of a ride is . . . hilarious and yet remarkably serene given the quiet bayou setting.

Generally considered Disneyland's finest restaurant (omitting, of course, the members only Club 33), Blue Bayou was the natural choice as the location for one of the boxes of truffles. I bought this box during my first day at the parks. Now, I have a bit of a phobia around aquariums and the like (even the fish tank section at Petsmart gets me a little uncomfortable) and that includes the Submarines at Disneyland: I usually avoid them. So while the rest of my party went on the Submarines, I went by to see if Mr. Toad had a short line (it didn't, so I passed), went instead to the Sleeping Beauty Castle Walk-Through (which closed for the day just a moment after I walked in), and then made my way to the Blue Bayou. 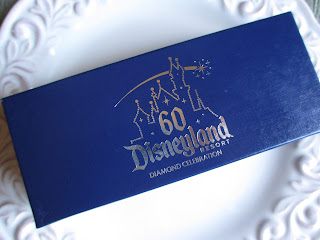 I asked at the main counter about the truffles and one of the women there went to bring a waitress. Both of them were friendly and gave good service. Here I waited just inside the door to the waiting around (for people dining there). First I had to wait for the truffles and my receipt and then to get my card back after it was scanned (bringing cash will speed your waiting time). Given my thoughts at Steakhouse 55 on the tip section of the receipt, I find it worth noting that when she brought me the receipt (in the usual black case you get at a restaurant), the waitress told me that she just needed my signature--I took it as a polite way of letting me know that it wasn't necessary to give a tip in this context (I still gave a small one because I was still feeling happy and generous).

I was glad, though, that I had come over here without my group: it did, once again, take a few minutes. And yet that's exactly why I felt nicer giving at least a small tip: it seems like everyone kind of has to go out of their way to get you your box of truffles and while that's part of their job, you do feel like they deserve a little something extra for it (although the thought did occur to me that the first woman I spoke to also had to leave her place at the front to get the waitress and yet she probably doesn't get tips). 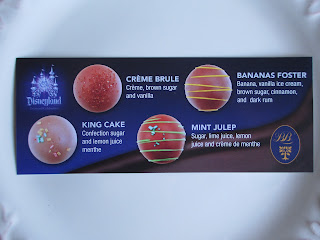 Okay, enough on that. Let's move on to the box, which, as you can see, is exactly the same as the first one. Small and blue with the Diamond Celebration castle. (I stored it away in our Main Street locker with our sweaters for the rest of the day to make sure it would stay safe.) All four of these truffles, however, are milk chocolate, perhaps because milk chocolate was thought to better suit the casual mood of Disneyland? They're also all fairly colorful and happy-looking, which might either speak to the mood of Disneyland or the New Orleans style of the Blue Bayou and its surrounding area. The color palette I like, but the milk chocolate exclusivity I'm not sure about. I'm especially not sure about it because my air conditioning is off (it was almost completely out for a couple of days, too) and so it's a bit difficult to deal with milk chocolate without it melting right away. 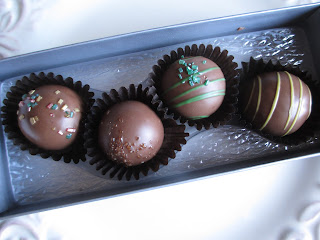 Let's start with the King Cake truffle: "Confection sugar and lemon juice menthe." It has a slightly darker chocolate ganache and colorful, almost metallic sprinkles on top, making it truly ready for a celebration. I've only had King Cake once and I think it was someone's first attempt at making it, so I really don't know much what it tastes like. Here, however, is what the truffle tastes like: bananas, brown sugar, creaminess, and milk chocolate. It doesn't taste at all like lemon to me, which I certainly don't mind. The banana taste, though, made me wonder if it had perhaps absorbed some of the flavor of the Bananas Foster truffle while sitting in the box. It's a good chocolate, I say with a shrug. 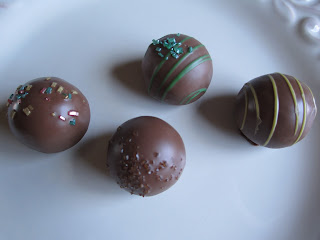 Next comes Creme Brule: "Creme, brown sugar and vanilla." Once again, the center looks slightly darker (and also a little more syrupy than with the other truffles); brown sprinkles decorate the top of the shell. I taste the vanilla, yes, and the sugar, too, and just a hint at that caramelized flavor of the dessert that served as inspiration. In fact, it's rather like the dessert (which is rather sweet to begin with), just with a lot of milk chocolate in there, too (although it's a dessert that's often flavored, with anything from chocolate or maple to coffee or berry). Possibly I would say that the milk chocolate is a tad too dominant of a flavor this time, though. Despite being a bit sweeter, I would call this truffle a little nicer than the King Cake one. 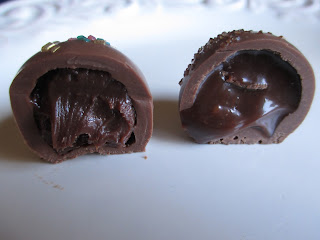 One of the truffles I was most looking forward to happened to be one of my disappointments, the Mint Julep: "Sugar, lime juice, lemon juice and creme de menthe." Its cream-colored center is fairly free-flowing, and green stripes with a couple of those metallic sprinkles in blue decorate its top. Now, when I'm at Disneyland, one of the snack stops I like is the Mint Julep bar, where you can get a mint julep and a bag of Mickey Mouse beignets--or you can order a mint julep to drink when you eat somewhere like the Blue Bayou. I just think they're pretty and they taste nice and somehow I'm amused by the fact that Disney has turned an alcoholic drink into a non-alcoholic one. So I had a lot of hope for this truffle.

It tastes right away like mint, quickly followed by something that turns into lime, then it all tastes a little chalky. About halfway through, the milk chocolate develops as a background flavor. Yes, the truffle does taste a bit like Disney's mint juleps but it also tastes like an Andes mint--and you can get 10 of those for $1 or something like that. So it's an alright chocolate, maybe even nice (Andes mints are good, in their way), but much less than I had hoped for. It would have been better if it didn't taste so chalky and if it were made with dark chocolate instead of milk chocolate (Whoever pairs mint with milk chocolate, anyway? That's rare). 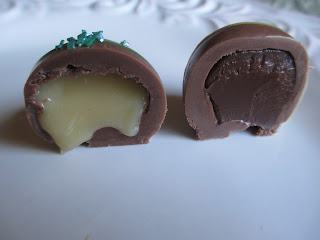 Finishing the box off is the Bananas Foster: "Banana, vanilla ice cream, brown sugar, cinnamon, and dark rum." Again, the ganache looks slightly darker than the chocolate; yellow stripes stretch across the surface. This truffle tastes of bananas and more bananas and not much else, even though it has such a long list of flavors. There's some cinnamon in there, and I guess there's also some vanilla. I suppose the definite sweetness counts for the brown sugar; I can taste the milk chocolate. But I'm not getting any rum. So I suppose if you like bananas and chocolate together (and they are an underrepresented pairing in chocolates, if not in desserts), it's nice.

I've let myself repeat phrases when describing this box. Everything is nice or good or pretty. Everything is milk chocolate. But nothing really stood out to me and certainly nothing was worth the $16.99 price tag. This is more what I had been initially expecting from this truffle line (before I tried the Steakhouse 55 set and found them just a little bit better): mediocrity. This is the kind of thing I get from Godiva when I have a coupon or they have a sale and I'm just in the mood for some sweet and flavored milk chocolate to munch on. The Steakhouse 55 box was definitely better overall: perhaps its execution was more varied, or more thought out.

Because if these are just the weaker of the three boxes (and I would be okay with that), that could mean an acceptable overall quality for the Diamond truffles. As you all know, I'm probably a little more quick to criticize chocolate than the average Disneyland goer--so while I find some depth lacking in this box, maybe most everyone else will just all them another Diamond Celebration dessert: they're nice little chocolates.

Click here for my review of the second box, from Carthay Circle.
Posted by Deanna Skaggs at 4:51 PM