Ah, Disneyland, you know me so well. You know that which will delight my heart. For the 60th Anniversary, what special something did you have on offer, just for me? Truffles. And not just one but three separate boxes of them, too. Ah, I am delighted.

I heard about these truffles not long before I found out also that I would be able to visit the parks in late July. So even though each box comes with a $16.99 price tag before taxes, I made my plans to get all three. Each box is designed for one of the restaurants around the resort: Steakhouse 55 in the Disneyland Hotel, the Blue Bayou in Disneyland, and Carthay Circle in Disney California Adventure. Initially, you were supposed to be dining at the restaurant to purchase the truffles but they quickly opened that up to allow everyone to buy them, regardless of whether you're eating at the restaurant. 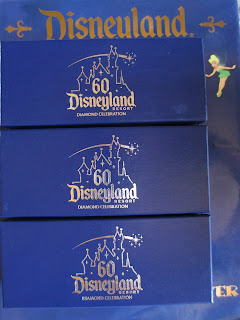 It is my tradition to spend the evening before the park day(s) in Downtown Disney, walking around and shopping at World of Disney and having dinner somewhere there. So I made a stroll over to the Disneyland Hotel and spent some time in the lobby looking over their lovely giant map of Disneyland, and then headed over to the Steakhouse 55 entrance. I asked the hostess about the truffles; she was friendly and let me know that I could buy them from the waiters or the in the lounge. So I went up to the bartender and he brought a box out for me; he was also nice, telling me about how I was the first one to buy a box that day. That somewhat surprised me: given how excited I was for these truffles, I would have thought everyone else would be, too.

Here was where I ran into the unexpected: when you pay, you realize that your receipt looks exactly like it would if you were dining at the restaurant or having a drink in the lounge. That is, there is a space for a tip. Feeling generous (since I was around Disneyland), I thought I'd rather give a small tip than not give anything, even if perhaps not everyone tips when they're just picking up a box of truffles on the go. You'll also want to note that I did have to wait a few minutes from the time I arrived to when I left; so plan on taking your time and enjoying your surroundings, even if you're not dining in. Which, by the way, if you would like some nice dining, I do very much recommend Steakhouse 55, where I once ate for my birthday: it's a quiet, luxurious, and lesser-known corner with good food and service. I just had no plans to eat there (or at either of the two other restaurants with truffles) on this particular trip. 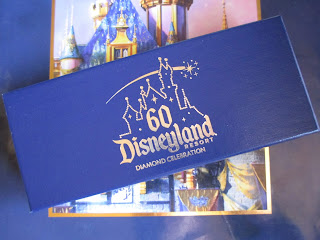 The truffles come in sets of four in small, rectangular boxes of roughly 2.5 inches by 6 inches. Classic Disney blue with a simple decoration of Sleeping Beauty Castle with a star soaring over it and the Diamond Celebration announcement make for something of a souvenir box. I was so happy with my little box that I had to hold it in my hands for a few minutes before stowing it safely away in a bag (the one I already had from World of Disney). 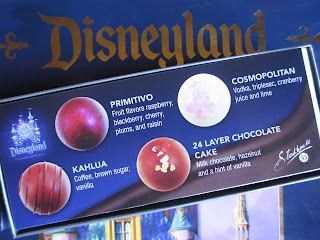 (I hope you don't mind that my photographs are against the background of Disneyland: Then, Now, and Forever, which was released for the park's 50th anniversary.)

A clear, circular sticker on each end of the box keeps it shut without ruining the look of the box. Underneath the lid you'll find a glossy paper with the Diamond Celebration logo in one corner, the Steakhouse 55 logo in the other, and images and descriptions of the four truffles in the center. The flavors are different for the different restaurants and are inspired by drinks or desserts associated with each restaurant. 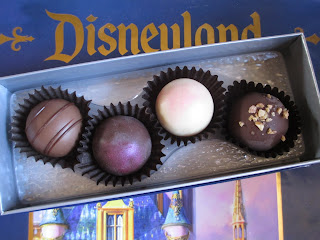 My truffles had a slight look of age about them, just the barest hint at bloom on the surfaces--perhaps they just weren't kept at the right temperature? (And this wasn't my fault this time: I peeked inside the box right away.) Otherwise they look nice in a clear plastic setting, inside their little chocolate papers. 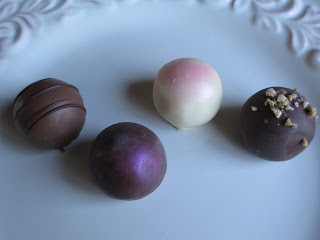 On the left we have the Kahlua truffle, which is described thus: "Coffee, brown sugar, vanilla." It has a milk chocolate shell with some darker chocolate stripes and a dark ganache center. You can definitely taste the coffee and sugar right away, with only a very slight alcoholic taste; it does have the flavor of Kahlua. The vanilla is in there, too. The milk chocolate makes the right base for these flavors, though I didn't get the chance to taste it much on its own.

Simply for the profile of flavors, this truffle was pretty good. It was probably a tad sweet and not quite on par with its price tag (which I was expecting, anyway), but it was still very enjoyable. It might be my favorite of the four. 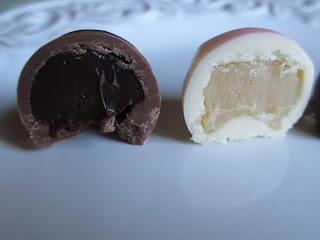 Next we have the Cosmopolitan, which has "Vodka, triplesec, cranberry juice, lime." It's white with a swirl of pink on top and a white ganache center. There is more of a bite to this truffle, what with the flavors of alcohol and lime, yet it is also very creamy from all of the white chocolate. The effect is like a citrus dessert, except that it isn't just the flavor of citrus that gives the sting here.

I'm not generally into tangy chocolates (or desserts), so I did enjoy this one more than I generally like citrus chocolates. I would say that owes to how much the white chocolate balanced out the tang. 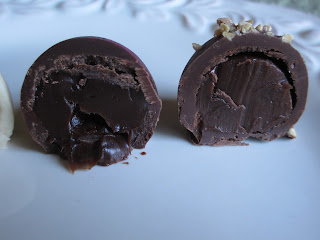 Coming in third is the Primitivo: "Fruit flavors, raspberry, blackberry, cherry, plums, and raisin." It appears to have a dark chocolate shell, with a swirl of magenta color on top and a dark ganache center. Here is the order that I tasted all of the flavors: blackberry, raisin, cherry, raspberry, plums; I was impressed that I did taste each of these, in quick succession yet still individually. They're all woven in quite nicely, each with their own moments even while they blend together like a rich fruit jam. Again, I can't taste the chocolate itself much: it's just a base for the very pronounced added flavors.

Still a tad sweet for a truffle--but otherwise rather good and one of my favorites from the set. 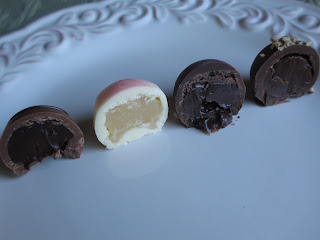 Last is the 24 Layer Chocolate Cake: "Milk chocolate, hazelnut, and a hint of vanilla." This chocolate appeared slightly darker than that of the Kahlua truffle; it's topped off with little bits of hazelnut. Probably I would call this truffle the most disappointing of the lot. It began alright. I was tasting the nuttiness along with the chocolate and it was very nice, like a warm dessert, but then I suddenly got a weird, artificial or stale flavor. It must be the vanilla. Granted, it didn't taste quite so weird on a second tasting, but was still very disappointing.

I love chocolate and hazelnut together and I love good vanilla (it's great in tea), but there was just something here that didn't come over right. It tastes like a mediocre ingredient to me. The truffle was okay--but I'd call it the weak one out of the four.

Call me pessimistic, but I wasn't expecting much from these truffles, as excited as I got over them. I was simply excited over the idea of them and the fact that I'd get to keep the boxes forever and I'd get to review Disneyland truffles. But, you know, I think these truffles were good. Yes, they seem fairly mass-produced and they are overpriced (but what Disney food isn't?). But they were a lot of fun to buy and to try and to bring home with me. And the flavor profiles were pretty good: overall, it appeared a lot of thought went into what flavors should be portrayed and in what balance they should all appear.

So with the Kahlua and Primitivo truffles as my favorites, I'll approve of the Steakhouse 55 box. Next up will be the Blue Bayou.

Click here for my review of the second box, from Blue Bayou, and here for the third box, from Carthay Circle.
Posted by Deanna Skaggs at 8:52 PM